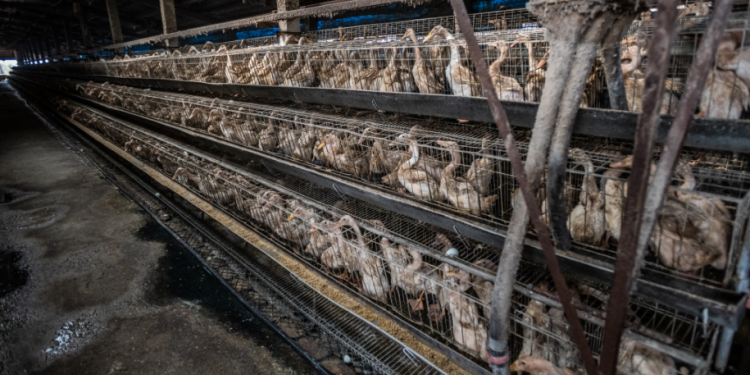 News
In December 2018, Taiwan’s Food and Drug Administration asked the European Commission to be allowed to export Taiwanese processed egg products, including duck egg products, to the EU. The application is still pending, but with the sector witnessing a move towards battery cages, Taiwanese NGOs are campaigning to raise awareness on what would be a serious step back, not only for animal welfare but also for public health.

The situation emphasises the urgent need for more stringent market access provisions in the EU, not only to prevent EU progress on animal welfare being undermined by imported products, but also to better promote higher animal welfare in third countries.

Under existing legislation, the EU does not impose any animal welfare criteria to imported eggs and egg products. While the EU has banned the use of battery cages for laying hens for more than a decade, this method of production can still be used by producers exporting to the European market, and by EU producers of other kinds of eggs.

The case of Taiwan’s duck eggs is interesting as this is an industry that used to rely almost entirely on cage-free systems. Unfortunately, the sector has not been spared by the trend of intensification and an increasing number of water-loving ducks in Taiwan - around 20% of the 2.16 million laying ducks - are now kept in tiny barren cages, away from the water which is so essential to maintain their health, regulate their body temperature,  and keep their plumage in good conditions.

Investigations in Taiwan have revealed ducks with wounded feet caused by the dry conditions and rusty wire floors, and animals exhibiting abnormal stereotypic behaviours resulting from life in a cage. According to the Environmental and Animal Society of Taiwan (EAST), who launched a domestic campaign on this issue, the mortality rate of ducks kept in conventional cages is two to five times higher than that of ducks kept in cage-free systems equipped with water troughs and nesting boxes, illustrating the inadequacy of cage systems.

Such intensification has also an impact on public health. The recent COVID-19 pandemic, while having emerged from wildlife, has put the spotlight on zoonosis and on the risks related to intensive farming. Intensively farmed poultry are most notable for Highly Pathogenic Avian Influenza (HPAI), the recurrence of which is due to interaction between animals with a compromised immune system and wild animals potentially carrying low pathogenic viruses. Over the past decade, Taiwan has faced many occurrences of HPAI, and has previously been unable to timely report the outbreaks and to address them transparently. It is often argued by the poultry sector that avian influenza is mainly spread by wild birds. However, the viruses carried by wild birds are usually of low pathogenicity and it is only when these viruses reach overcrowded sheds that they can evolve into a more dangerous form of avian influenza (1).

Humans can be contaminated by zoonotic influenza, whether they originate from birds or pigs. The previous pandemic, the H1N1 outbreak in Mexico, killed between 151,00 and 575,000 people worldwide, 80% of which were under 65 year old. It is thus important to favour systems that will be more resilient to such diseases, and the European Commission should consider this aspect when assessing Taiwan’s bid to export duck egg products into the EU.

A record-breaking 1.5 million EU citizens have called for a ban on cages in the EU, demonstrating the strength of public opinion on this issue. As the EU considers moves to strengthen domestic regulations, it should not repeat past mistakes by leaving the door open to low-welfare imports. Any ban on cages should thus become a requirement for those exporting to the EU, including Taiwanese duck egg producers.

With the review of animal welfare legislation foreseen in the EU Farm-to-Fork strategy, the external dimension of our rules cannot remain overlooked. As the European Commission concluded itself, imposing EU standards to imported goods (as with the slaughter regulation) is the EU’s best tool to promote higher welfare abroad. Eurogroup for Animals will continue to actively press for a ban of all cages in Europe, and for EU rules to apply to imported products. In this case, it would ensure that more trade in eggs between the EU and Taiwan does not negatively impact the animals and the planet.