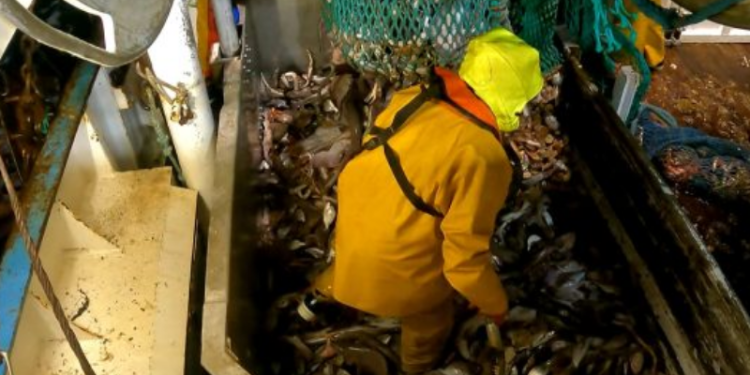 The Animal Rights Organisation ‘Soko Tierschutz’ conducted an investigation over five days on two trawlers in the English Channel and North Sea. The seafarers fished for sole every three hours, but the investigation uncovered the alarming rate at which unwanted species - young sharks, rays, plaice and crustaceans, are also fished as ‘bycatch’.

Sharkproject estimates that around ten times the amount of bycatch is taken out compared to the fish that can be sold. Commenting on the investigation footage, Iris Ziegler, Sharkproject Fisheries Expert, told Report Mainz, “None of these animals that have been treated like this will survive. But if you look at these masses, they can estimate how much life is senselessly extracted from our seas every day. And that takes its toll on the ecosystem.”

The investigation footage portrays disturbing scenes on a fishing boat in Normandy, where fish are sorted, die of asphyxiation or are sliced open and gutted without stunning and then are thrown back into the sea as a dead mass.

Report Mainz confronted the European Commission with the findings, to which the Commission referred to the ‘landing obligation’ that was introduced on 1 January 2019 whereby Member States are obliged to enforce that all caught fish are landed and not discarded.

On fish welfare, the European Commission replied, "We cannot say too much about animal welfare in fishing. This is not regulated at EU level. However, we have identified animal welfare in this area as a key area for the future. We need to take action especially in the area of transport and slaughter of animals."