FROM THE LONELIEST TO THE LUCKIEST ELEPHANT: KAAVAN TAKES OFF FOR CAMBODIA 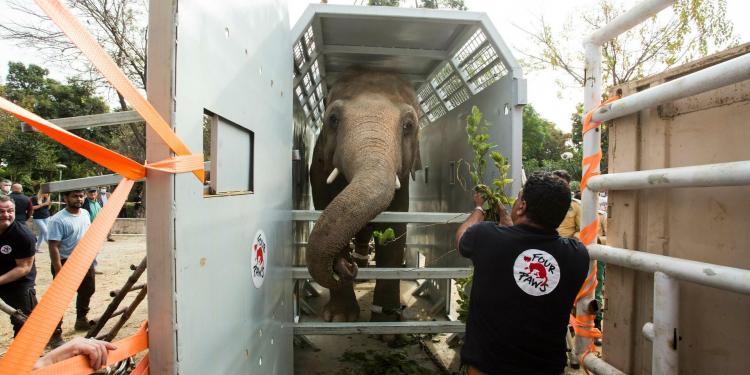 FROM THE LONELIEST TO THE LUCKIEST ELEPHANT: KAAVAN TAKES OFF FOR CAMBODIA

For the first time FOUR PAWS moves an elephant by air
A Russian cargo plane, a four-tonne transport crate able to hold 200 litres of urine and a negative Covid-19 test for a wild animal: these are just some of the things global animal welfare organisation FOUR PAWS had to organise for the departure of the world's loneliest elephant. After months of preparation and more than 35 years of captivity, elephant Kaavan has started his journey from Marghazar Zoo in Islamabad to the Cambodia Wildlife Sanctuary in Siem Reap on 30th November. There Kaavan will live a species-appropriate life with other elephants. The historic wildlife transfer is implemented by FOUR PAWS in cooperation with the Pakistani authorities, American businessman Eric S. Margolis and the NGO Free The Wild, co-funded by Cher. Kaavan, together with the FOUR PAWS team, is expected to land in Siem Reap in the afternoon of 30th November. The release to his new enclosure is planned for 1st December.
Read more at source
Four Paws
Elephants
Zoo
Rescue center
Deel op FacebookDeel op TwitterDeel op PinterestDeel op Linked InDeel op Whatsapp