Live exports: another wake up call for the Commission to stop it 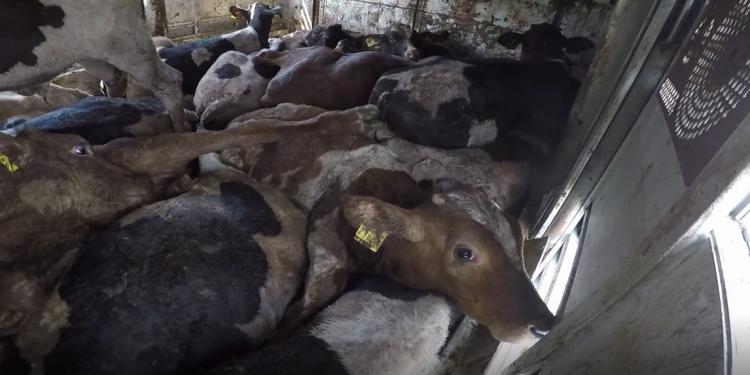 Live exports: another wake up call for the Commission to stop it

Despite the European Union (EU) being proud of its high welfare standards, no regard is paid to EU animals exported outside its borders. The new Manfred Karremann documentary, broadcasted yesterday by ARTE, shows the urgency of banning live export under the revised Transport Regulation, and to support a shift to a trade in meat, carcasses and genetic material only.


Millions of bovines and ovines are exported every year from the EU to Third Countries via sea and road regardless of the lack of information by Member States and the EU Commission on whether these countries implement EU animal welfare transport standards.

The documentary takes stock of 18 years of investigations and brings us back to 2017, when the Eurogroup for Animals pan-EU campaign #StopTheTrucks signed a milestone for the animal welfare movement. However, despite some improvements, the conditions of animals exported are still far from being acceptable and violations are not an exception, as denounced by NGOs Representatives from Animal Welfare Foundation (AWF), Animals International, Deutscher Tierschutzbund, Fondation Brigitte Bardot, and Welfarm.

After dreadful transport conditions, the majority of these animals are sent to slaughter and shocking footage, released by Animals International, shows barbaric practices which also contradict the halal requirements. Indeed, Miran Ismael, Audit & Administration Manager at the European Certification Center for Halal, declared “It is not because we kill an animal alive that its meat will be halal”. He reminded as well that strict animal welfare rules should be respected for the meat to be considered halal.

Eurogroup, myself and many NGOs made efforts for decades to improve the situation in livestock transport. A lot of improvements were achieved in the past 30 years in Europe. But we may not ease up, because the situation outside the EU is still disastrous for millions of animals commented Manfred Karremann.

Despite the resources invested in enforcement and implementation of the EU animal welfare transport rules, Karremann’s reportage shows how these animals are still exposed to a brutal reality. It is time for the EU to follow the advice of the European Food Safety Authority (EFSA), the World Animal Health Organisation (OIE) and the Federation of Veterinarians of Europe (FVE) and reduce, refine and replace live animal transport.

Do Europeans want to be accomplices of the cavalry of these sentient beings? For decades EU citizens have urged decision makers to end this horror show. Currently the EU rules on slaughter only apply for meat entering the EU market, but by transporting meat, carcasses, an genetic material, we would be able to preserve animal welfare during transport and at the time of killing, without undermining the trade itself. It is time for the EU Commission to prepare a strategy to make this trade a reality commented Reineke Hameleers, CEO at Eurogroup for Animals.

Watch the documentary on ARTE

Notes:
Manfred Karremann started investigating animal welfare back in 1989 and since then he’s reported his findings in books and documentaries. His documentaries were aired on BBC, NBC, CNN,  ZDF, ARD, Sat.1, Stern TV and RTL. In addition to his journalistic activities, he is a consultant for the criminal police special training of the Federal Criminal Police Office. Karremann works with several different animal welfare organisations and he also founded Animal Network eV.