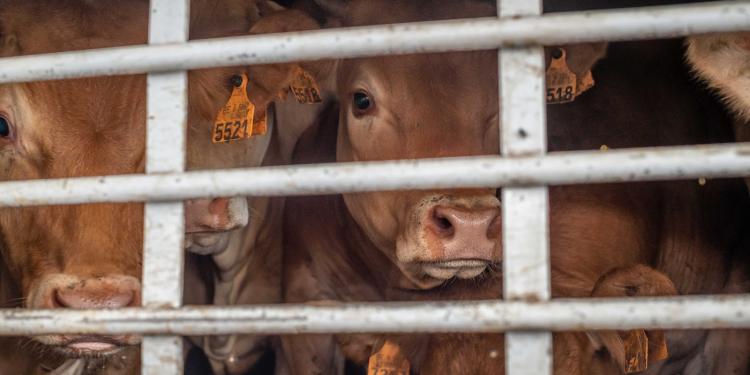 The scandal of young bulls sent back from Algeria to be finally slaughtered in France bears witness to the absurdity and cruelty of the practice of exporting live animals outside the European Union.

On September 2, the 45-year-old cattle ship Nader-A, flying the Togolese flag, left the port of Sète with 780 bulls weighing about 600 kg each. Destination: Algiers. When it arrived on September 4, the Algerian authorities refused to unload the animals because of the health risks involved. Some bulls exported did not have documents certifying that they were not carriers of infectious bovine rhinotracheitis (IBR), an extremely contagious disease. No personnel from the port of Algiers was authorised to board the ship, instructed to stay away from a potential source of infection.

Finally, the Nader-A left the port of Algiers on September 19, 15 days after its arrival. Destination: the port of Sète, its starting point. It docked on Friday September 23 after remaining at anchor for more than 24 hours. According to our information, several animals died on board. Following a veterinary visit to the boat, the Hérault prefecture reported on its side "a dead bull calf" and three others "deemed unfit for transport" who had to be euthanized.

We denounce the absurdity of the situation. The animals were stranded for 15 days at the port of Algiers before being repatriated to France to finally be euthanised. It's a lot of unnecessary suffering.
Judith Dei Rossi, representative of Welfarm

The animals were slaughtered the day after the arrival of the Nader-A at the port of Sète, at the slaughterhouses of Rodez and Saint-Affrique, requisitioned for the occasion by the French State.

The French Ministry of Agriculture explained that a "difficulty in interpreting" the health status of three animals was the cause of the blockage, assuring "that there was no breach by the French authorities on the certificate of 'export' allowing the departure of the animals. Healthy bulls had been vaccinated against infectious bovine rhinotracheitis (IBR). However, documents attached to their export certificate bore the mention “IBR positive”, falsely suggesting that they were carriers of the virus, according to the ministry.

Upon their return to France, the animals were therefore not slaughtered because of the risk of contamination with infectious bovine rhinotracheitis. The bulls received hay at the port of Algiers, and with foot-and-mouth disease raging in Algeria, it is for this reason and in the name of the precautionary principle that the French authorities have taken the decision to euthanise and incinerate them. The risk of contamination is "extremely minimal, but it cannot be ruled out", the government had detailed, specifying that the cattle would not be "put back into the circuit of human consumption" once slaughtered.

For its part, on Friday September 23, the prefecture of Hérault had pointed out that "the results of the analyses and the veterinary visit [did] not report any sign of contamination with foot-and-mouth disease".

Welfarm and the animal rights associations were not the only ones to highlight the absurdity of such a situation. “I wonder if there was not the possibility of making another decision than that”, wonders Jacques Molières, president of the chamber of agriculture of Aveyron, quoted by the media Center Presse. Unicor, the agricultural cooperative managing the Rodez slaughterhouse, also reacted in a press release, “deploring this situation both from the point of view of animal welfare and respect for the work of French breeders”.

After the Welfarm revelations, information about this new scandal linked to animal exports to third countries spread like wildfire. Numerous titles from the regional and national press, radio and television followed this sinister "series" over several days. On social networks, the testimonies of citizens shocked by the treatment reserved for animals have multiplied.

The miserable fate of these hundreds of young bulls has therefore moved both professionals in the sector and the general public. Only one response is able to respond to this legitimate indignation: put an end to the export of live animals to third countries, and replace them with the transport of carcasses.