Live export from Europe to third countries is booming despite tragedies 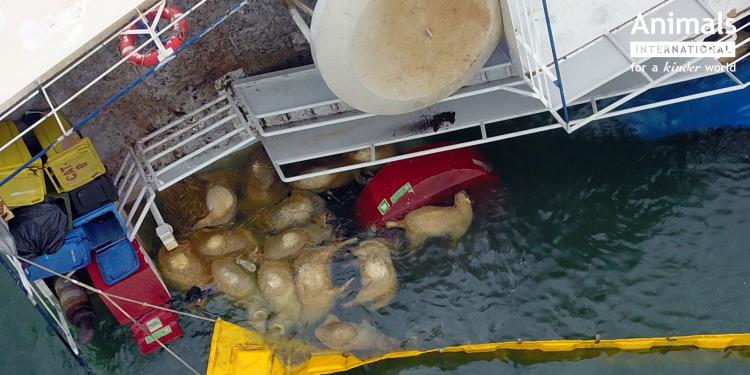 Live export from Europe to third countries is booming despite tragedies

1 year after the live export vessel MV Queen Hind capsised killing thousands of sheep no one is held responsible. Eurogroup for Animals and Animals International, its member organisation in Romania, today remember the thousands of sheep who endured the most horrible death a year ago in the Romanian harbour of Midia.

The tragic anniversary is the opportunity to remind the lack of action by the Romanian Government and the EU Commission which led this barbaric trade to continue, with over 4 millions cattle, sheep and goats being shipped in despicable conditions to countries where animal welfare doesn’t meet the European standards.

Romania alone experienced a major raise in live animal exports since the Queen Hind capsised, with more than 2 million animals leaving the country by sea to reach North Africa and the Middle East, a journey that may take up to three weeks.

While Romanian authorities insist that the density was 10% less than usual, the company hired to take the ship out of the water found secret decks with extra animals that were not part of the official vessel documents. The Romanian Government has not published their conclusions on the incident’s investigation.

The Queen Hind was overloaded, and animals were sentenced to an unavoidable death caused by greed and corruption. The Romanian Government has made no step forward to end live export and has also failed to progress in its commitment to work towards phasing out the trade.

Temperatures in the Gulf may reach 50 degrees Celsius in the shade. Despite evidence of Romanian sheep suffering extreme heat stress, in July the Romanian Parliament passed a new law allowing live exports to take place when temperatures rise above 35 degrees Celsius. Even with the added requirements to shear animals and reduce stocking density by 10%, this new law breaches the EU transport Regulation that clearly demands Member States to freeze exports if temperatures soar above 35 degrees.

This bill was debated after the Queen Hind tragedy and was initially aiming to improve the welfare of exported animals by freezing exports during summer, as Australia has done, and having a veterinarian on board all ships. But interference by foreign animal trading companies in the Parliamentary debates saw the bill watered down in a form that breaches the current EU Regulation.

The audits carried out by the EC in European harbours indicate major deficiencies, especially in Romania which dedicates more than half of their maritime fleet to export of EU animals to third countries. The Commission concluded that these authorisations were granted superficially and that the fleet endangered animals and crew.

Moreover, within the Farm to Fork strategy the EC intends to revise the EU animal transport regulation and the EP created the Committee of Inquiry on the protection of animals during transport (ANIT).

Thanks to the ANIT Committee we believe that MEPs will have all the evidence they need to investigate how Member States apply the current Transport regulation and finally stop live transport in favor of meat and carcasses trade.

Animals International and Eurogroup for Animals call on the EU Commission to start an infringement procedure against the Romanian Government for continuously failing to comply with the EU animal transport regulation.

In the aftermath of the incident Eurogroup for Animals members Animals International and Four Paws were both involved in the rescue operations.

Eurogroup for Animals represents 70 animal advocacy organisations in 24 EU Member States, Switzerland, Serbia, Norway, Australia and the USA. Since its inception in 1980, the organisation has succeeded in encouraging the EU to adopt higher legal standards for animal protection. Eurogroup for Animals reflects public opinion through its membership organisations’ affiliations across the Union, and has both the scientific and technical expertise to provide authoritative advice on issues relating to animal welfare.

Animals International is the global arm of Animals Australia, Australia's foremost animal advocacy organisation. Recognised internationally for strategic public awareness campaigning, our ground-breaking investigations have spanned more than 15 countries — shining a spotlight on animal abuse, forcing government intervention, driving change and empowering individuals and communities to be active participants in the fight against animal cruelty. Over the past decade, Animals International has conducted over 70 investigations throughout the Middle East, North Africa and SouthEast Asia revealing the brutal handling and slaughter of exported animals once they arrive in destination countries.