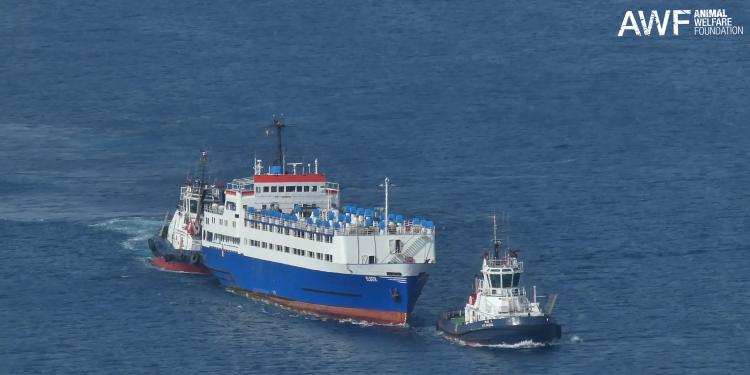 Press Release
The fate of 1,700 bovines is still uncertain: after three months at sea they keep being bounced around the Mediterranean. We join the European Parliament Intergroup on the Welfare and Conservation of Animals in reaching out to the Spanish and Greek authorities.

The story of the two vessels which left Spain back in December 2020 has made headlines around the world over the past weeks (1) (2) but no timely action was taken to save the animals onboard.

Both livestock cargos were rejected in Tripoli (Libya) due to bluetongue disease suspects and have been navigating around the Med in search of a port, and a buyer, which would accept them.

Concerned over the animal conditions, a group of EU Parliamentarians, members of the Intergroup on the welfare and conservation of animals and working on live transport, wrote to the European Commissioner for Health, Stella Kyriakides, calling for her intervention to solve the issue. Meanwhile, the ANIT Committee, established within the European Parliament to investigate the implementation and enforcement of the Transport Regulation, immediately contacted the Spanish Minister of Agriculture to share their concerns and require access to any follow-up investigation material.

To their credit, the European Commission has intervened several times during the past few weeks as this crisis has escalated, with the Commissioner for Health and Food Safety, Stella Kyriakides, personally reaching out to the Greek authorities in the last few days. The Commission has sought to ensure that the welfare of the animals on board is maintained, to every degree possible, and has reminded Member State authorities of their obligations under EU law.

After spending three months at sea, literally lost in a bureaucratic limbo, the Karim Allah journey ended in Cartagena (Spain) where all the remaining 864 bovines were unloaded and killed. The vessel’s activity was in violation of the current Transport Regulation, due to the lack of contingency plans.

The same fate could await the other vessel: the Elbeik has reached different ports in Greece (Crete and Piraeus) but never docked. The over 1,700 animals onboard have never been checked by a veterinarian in the past three months. Thanks to the relentless work of our members on the ground, and to direct contact with the vessels’ lawyer, we know that there are more than fifty dead animals onboard.

We fully support the European Parliament Intergroup on the Welfare and Conservation of Animals call for:

Other live transport crises happened before, but this last one affects a staggering number of animals: 2,671 bovines, which the Treaty on the Functioning of the European Union states are ‘sentient beings’, have been treated just like a commodity. It’s clear that this can’t be repeated. We reaffirm our call to end live export and shift to a meat/carcasses and genetic material only trade.