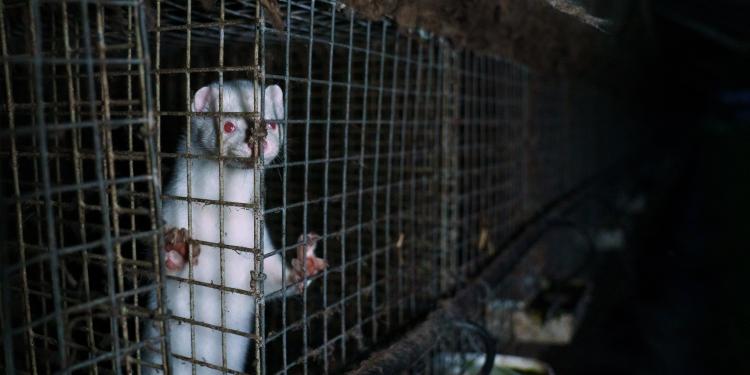 In the wake of COVID-19 outbreaks on mink farms throughout Europe - which have also laid bare the cruel conditions under which these animals are intensively confined - leading animal protection organisations today held an online conference to address the animal welfare and public health concerns associated with fur production. This event was organised in collaboration with the European Parliament’s Intergroup on the Welfare and Conservation of Animals.

Hosted by MEPs Anja Hazekamp (GUE/NGL), Niels Fuglsang (S&D) and Anna Deparnay-Grunenberg (Greens/EFA), this timely event brought together politicians and policymakers with prominent experts on animal welfare, veterinary epidemiology, NGOs and even a former fur industry insider to consider the animal welfare and disease risk problems related to exploiting fur-bearing species, such as mink and foxes, for their pelts. Recent footage from fur farm investigations was also screened to illustrate the inherent welfare problems involved in fur production.

Given the urgency of the situation we believe it is high time for the Commission to show leadership and introduce measures to suspend fur farming across the EU.  The potential risks of the SARS-CoV-2 virus further spreading and potentially mutating, pose serious threats across borders and require an EU approach. We trust that this proposal will be made at the AgriFish Council meeting. In the longer term we believe the moment is ripe to phase out this sector once and for all. Several EU surveys have shown that the vast majority of EU citizens do not approve of fur farming and 11 EU countries have already banned or restricted this industry or are in the process of doing so. The pandemic has put the spotlight on the vulnerability of fur farming which end is long overdue.

Confining wild animals in small wire cages for the trivial purpose of fur production should be consigned to the past. The horrific footage from Polish and Finnish fur farms, which we have seen at today’s meeting, are far from unique. We saw exactly the same kind of images of animal suffering on fur farms in the Netherlands over a quarter of a century ago when the political debate on banning fur production began. In the past days, the very last mink on Dutch farms were gassed to death and the cages stand empty after the industry phase-out was brought forward to eliminate potential coronavirus reservoirs. Fur farming is now over in my country. I look forward to the day when we can end the suffering of all animals on fur farms and see a completely fur-free Europe.

In the past months, the public has been confronted with the fact that fur farms are not only places of enormous animal suffering, but they can also act as virus factories. The living conditions on fur farms, which confine wild species at high densities and in close proximity, fail to satisfy the animals’ most basic welfare needs, leaving them highly stressed, which can lead to their immune systems being compromised. The outbreaks of the SARS-CoV-2 virus on fur farms have confronted us with the terrifying reality that fur factory farms create ideal conditions for diseases to propagate from one animal to another, and for viruses to mutate into forms potentially virulent to humans. We don’t need frivolous fur fashion. And we certainly don’t need these unnecessary reservoirs for coronaviruses. More than ever, it is time to make fur history.

Humane Society International/Europe is a leading force for animal protection in the European Union, with active campaigns to protect wildlife and end trophy hunting, reduce and replace animal use in scientific research and product testing, and reduce the number of animals suffering for food, skins and fur.

The Fur Free Alliance exists to end the exploitation and killing of animals for fur. The Alliance is an international coalition that consists of more than 50 animal protection organisations, based in more than 35 countries around the world, working collaboratively to bring about the end of fur farming and fur trapping, using wholly peaceful means.