LAV investigates sudden death of over 1,000 minks on farm 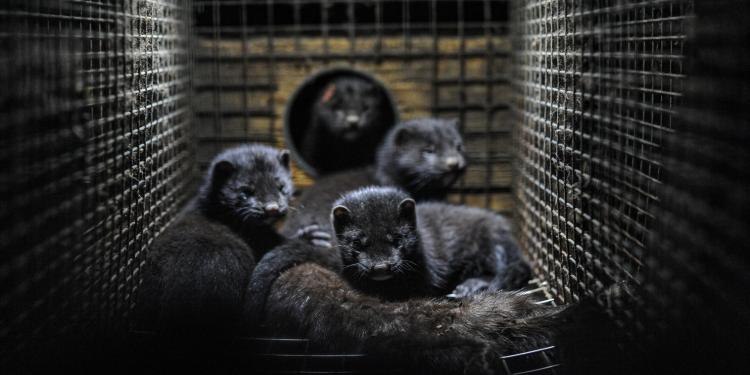 LAV investigates sudden death of over 1,000 minks on farm

Last August, in one of the 5 remaining mink farms in Italy, 1,035 mink died of a sudden and extremely painful death due to food poisoning. According to the investigations carried out by the health authorities, the animals were given spoiled or contaminated chicken meat.

Shortly after receiving this information from the local health authorities, our Member Organisation LAV was able to conduct an undercover investigation to document a chilling discovery: the bodies of all 1,035 mink are still being stored in a cold room inside the farm (together with the offal of chickens destined to feed the last 30 surviving mink of the farm).

In the footage, the farmer also shows a makeshift "gas chamber" used to slaughter the minks - a box of wood and metal which is connected to the exhaust of a chainsaw. This is in clear violation of the legislation to avoid suffering to minks via the use of "direct or progressive exposure of conscious animals to a gas mixture containing more than 40% of carbon dioxide” and indicates gas concentration, duration of exposure, gas temperature as fundamental parameters to monitor. Furthermore, in order to avoid stressful situations or episodes of aggression, it is necessary to kill a single animal at a time.

On top of the severe animal welfare concerns, the farmer was filmed in close contact with the animals without any Personal Protective Equipment, despite biosecurity measures introduced by the Ministry of Health over a year ago to prevent the spread of the Covid-19 pandemic.

Italy's fur farming ban entered into force on January 1, meaning that these 33 minks together with the other approximately 6,000 in the other 4 Italian farms should be transferred to structures managed by associations on the basis of provisions that will be defined by Interministerial Decree (Ministry of Ecological Transition, Agricultural Policies, Health) by 31 January.

LAV has already written a letter to the Ministers of Agriculture, asking to "reaffirm the prohibition of killing of mink present on farms".

In the meantime, no farmer will be able to make a profit on the killing of minks that are still on the farms thanks to the explicit prohibition of killing them in order to obtain fur.

It is scandalous how the Fur Industry continues to boast of its so-called responsible certification, such as the Welfur project, and in particular in reference to Animal Welfare when it is clear that animals suffer not only from the serious deprivations they are experiencing, but also due to the lack of attention and care with which they are managed. The episode of Castel di Sangro, with the death of 1,035 minks from food poisoning is the latest scandal of "made in Italy" fur discovered by LAV after our announcement of the 2 coronavirus outbreaks - in 2020 in Cremona, and 2021 in Padua - and the documentation in November 2020 of the violations of the minimum biosecurity standards in these farms.
Simone Pavesi, Head of LAV Animal Free Fashion