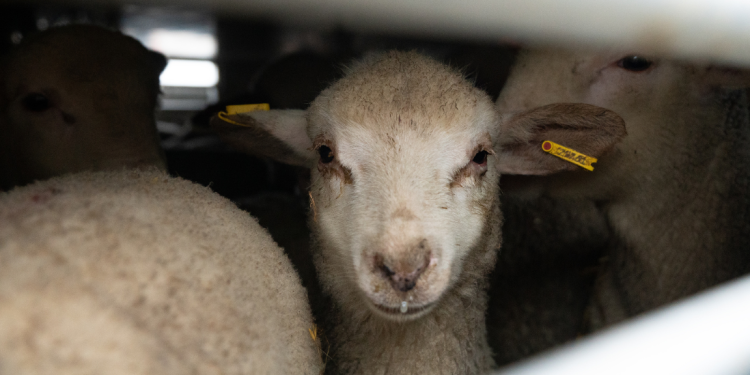 Several roadside checks have been carried out by our member organisation Essere Animali in the Gorizia area, northeast Italy. Seven trucks from Eastern Europe were identified transporting animals in overcrowded conditions, without proper watering systems, or adequate partitions and heights for transport.

As the Christmas season approaches, the number of trucks importing lambs into Italy from Eastern Europe rises, with long, gruelling journeys for the animals.

Last year, in the days leading up to Christmas, more than 600,000 lambs were slaughtered in Italy (source: National Livestock Registry Database), which is about a quarter of those slaughtered per year, and of these, one in four is imported from abroad.

The lambs range in age from not even 2 months to 3 months old, transported mainly from Romania and Hungary to slaughterhouses located mainly in Latium and Apulia, enduring journeys that could last from 24 to 30 hours.

In recent days, Essere Animali carried out an inspection of live animal transport trucks at the border between Italy and Slovenia, documenting the conditions of 7 four-floor trucks, with insufficient heights that did not allow the animals to stand upright, leading to several problems, including restricted movement. The lambs’ heads were touching the top floor of the compartment, a condition that can cause bumps, bruising and injury, as well as not allowing adequate ventilation.

The inadequate and unsuitable watering system is a prime example of the current regulatory gaps, which, combined with the high transport densities, cause suffering and thirst in lambs, putting them at serious risk of dehydration.

These are conditions also denounced by Essere Animali in Easter 2022 and for which the organisation had managed to get sanctions issued under the Legislative Decree No. 151 of July 25, 2007, which provides penalties for violating the provisions of European Regulation 1/2005 on the protection of animals during transport and related operations.

In 2021, only 3% of trucks carrying lambs from Romania were checked. The same fate also befell the one million cattle transported from France and the more than 800 thousand pigs that arrived from Denmark, with 4.6% of consignments checked. Of the more than 66 thousand live animal consignments that arrived in Italy, only 152 sanctions were imposed.

The control activities of Essere Animali also aim to document the conditions of transports that, while complying with current regulations, present critical aspects for animal welfare and highlight the need to implement European laws that better protect animals during the delicate phase of transport, which often causes animals additional stress and suffering.

The European Commission is currently engaged in a comprehensive review of laws on animal husbandry, transport and slaughter, with the aim of aligning them with the latest available scientific data, expanding their scope and ensuring a higher level of animal welfare. The new legislative proposal is expected in 2023, and Member States can play an important role by supporting an ambitious proposal for the protection of farmed animals.

We will inform the European Commission and the Minister of Health of the outcome of the inspections we carried out at the border again this year, providing images that document an alarming reality. The European Regulation, besides being frequently violated, is not able to protect animals concretely, and this is the most serious fact that shows how important the revision of the legislation is. Today it is legal to transport lambs as young as two months old for journeys lasting up to 30 hours, subjecting them to conditions that generate them great stress and suffering. Together with other NGOs from across Europe, we are calling for greater protections, such as banning the transport of live animals over long distances, decreasing travel hours, and banning the transport of unweaned animals. The European Commission has a chance to really improve conditions for animals. Do not betray the demands of your citizens!
Simone Montuschi, President of Essere Animali