Hunting industry: New Investigation about the leader in game farming in France 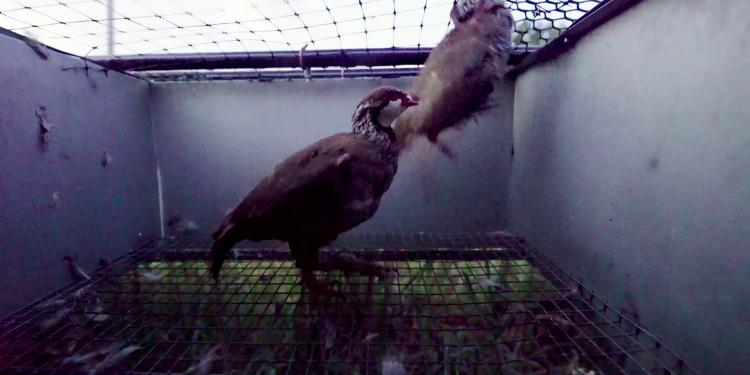 Hunting industry: New Investigation about the leader in game farming in France

News
L214 and Pierre Rigaux, independent naturalist, obtained the images of one of the largest animal hunting farms located in France (Missé in Deux-Sèvres), belonging to the giant of the hunting breeding industry, Gibovendée.

On this site thousands of cages are lined up for hundreds of meters for breeders, closed buildings (for young birds) and aviaries (last stage of breeding). The images show above all the fate of breeders in cages: the floor is wire mesh, the cages are cramped, the birds try to escape and bump into the ceiling of their cages. In these conditions of promiscuity, they all have a device on the spout (ring or cap) to prevent attacks between them, which often happens in these conditions of promiscuity.

Gibovendée holds 300,000 breeding pheasants and partridges and “produces” each year 20 million hatching eggs as well as one million birds ready to be released (according to the company). Export to other European countries is an important commercial outlet for this company. Exports to the United Kingdom alone represented a third of its turnover in 2016. Today, several shipping companies refuse to transport these birds intended for hunting. Eurotunnel is one of the few routes still open for England.

In France, 9 out of 10 pheasants killed in hunting come from farms. Usually released a few days or hours before the shots, 80% of them die within the first 48 hours: 50% of them are killed by hunters, 30% are predated: "Mortality, favored by maladjustment of these birds in the release environment also leads to significant and rapid predation by carnivores or raptors. »(ANSES, 2016, p. 2 and 6). In the images, we can partly observe the rearing conditions of these birds and their breeders. They alone explain the unsuitability of birds to a life in the wild.