Horsemeat from overseas: animal welfare and consumer protection at risk 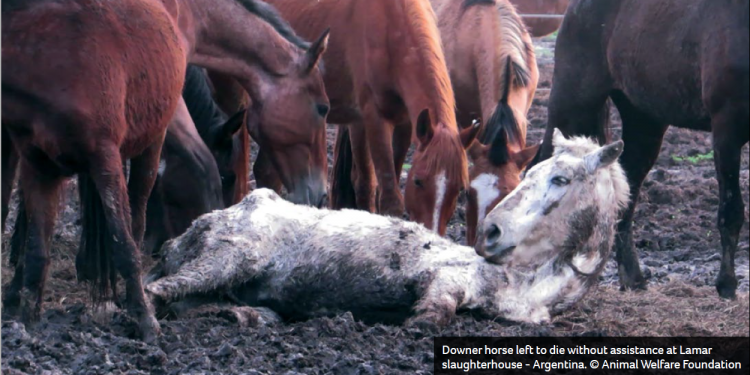 Horsemeat from overseas: animal welfare and consumer protection at risk

The latest NGOs investigations and EU audits in Australia and North and South America have, again, revealed massive problems with animal welfare and food safety. Today, the Intergroup on the Welfare and Conservation of Animals of the EU Parliament hosted a meeting on the import of horsemeat from overseas to analyse the problem.

New video footage proves that horses are systematically abused, mistreated and neglected. Severely injured and sick horses do not receive veterinary care or euthanasia. Downer horses are pulled off the trucks with chains and left to die. In Canadian feedlots, newborn foals still freeze to death at temperatures as low as minus 36° Celsius

Horsemeat imports from overseas have been criticised by international animal welfare organisations for many years. The Animal Welfare Foundation (Germany) and Tierschutzbund Zürich (Switzerland) published their first comprehensive investigation report about horsemeat production in North and South America in 2013.

As a result, all Swiss supermarkets took horsemeat from overseas off their shelves. Several Belgian, Dutch and French retailers followed their example. In 2015, the biggest Swiss meat importer GVFI (Basel) also stopped these imports on the ground that the equines’ traceability is not ensured. Yet, around 17,000 tons of horsemeat from overseas continue to be imported every year to the EU and Switzerland.

An international animal welfare coalition, via a petition which has already gathered nearly 120,000 signatures, is currently calling on the European Commission to immediately suspend the imports of horsemeat from countries where EU requirements on food safety and animal welfare are not respected.

"Since 2015, European importers have been trying to get to grips with the blatant animal welfare violations in their partner slaughterhouses overseas by producing new manuals and arranging on-site visits", added Gurtner. However, the importers' attempts to control the production conditions have been ineffective to this day, as confirmed by recent NGOs investigations and EU audit reports.

The malicious trade and slaughter of horses of unclear origin is causing serious animal welfare issues as well as health- and food safety risks. Horsemeat ends up indistinguishable in processed products, often sold in snackbars and cafetaria's, so consumers may even be unaware of what they are actually eating. Besides, the animal abuse uncovered in the NGO’s documentaries is horrific. There are no excuses for the European Commission to look the other way any longer. The import of horsemeat from overseas has to be immediately stopped

Commented Anja Hazekamp, MEP (GUE/NGL), President of the Intergroup for the Welfare and Conservation of Animals.

The most recent EC audit reports on horsemeat production in Uruguay (2018) and Argentina (2020) confirm “serious questions about animal welfare at the time of killing” and that “the shortcomings identified in the operation and effectiveness of the control system at these facilities do not allow the CCA (Central Competent Authority, ed) to provide guarantees that they are under adequate control, and thus to provide assurances that they meet relevant EU standards”.

The same EU audit reports also indicate that the audits did not reflect the everyday situation. “The inspections are announced in advance and slaughterhouses and horse dealers have developed a system to mislead the inspectors”, explains Gurtner. Footage recorded by NGOs shows that pens are emptied before the audits, or that sick and injured horses are exchanged with healthy animals.

The EU suspended Mexican horsemeat imports, following issues similar to those that occured in Uruguay, Argentina, Canada or Australia, and it led to a decrease in production and exports. Yet, now we witness an increase of Argentinian horsemeat imports into the EU, so any positive impact has been hindered by the lack of coherence of the EU approach on this dossier. The EU should send a clear message to its trading partners stressing that respecting the rules matters, and suspend imports where requirements are not met. Then, it should use its trade negotiations to incentivise progress and only restore imports if rules are respected

The petition: Demand an import suspension of cruelly produced horsemeat from overseas

The Animal Welfare Foundation e.V. (AWF) is an independent, non-profit, and internationally active animal welfare organisation. With our own investigation teams and animal welfare projects, we are committed to improving the lives of so called “farm” animals.

Eurogroup for Animals represents 70 animal advocacy organisations in 26 EU Member States, Switzerland, Serbia, Norway, Australia and the USA. Since its inception in 1980, the organisation has succeeded in encouraging the EU to adopt higher legal standards for animal protection. Eurogroup for Animals reflects public opinion through its membership organisations’ affiliations across the Union, and has both the scientific and technical expertise to provide authoritative advice on issues relating to animal welfare.
Equine welfare
Argentina
Deel op FacebookDeel op TwitterDeel op PinterestDeel op Linked InDeel op Whatsapp