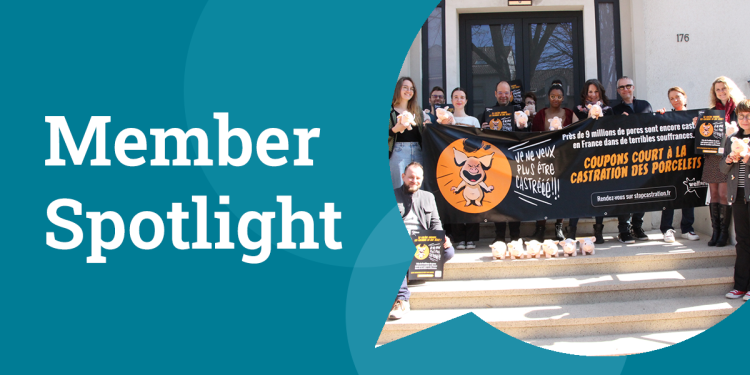 Every month, we interview one of our member organisations about their work, main battles and achievements for animals. This month we have the pleasure to interview Adrienne Bonnet, Head of Campaign, Advocacy & Legal department at Welfarm.

Founded in 1994, Welfarm - World Protection for Farm Animals is an organisation based in Metz, France, whose mission has been recognised as being of public utility. With more than 28,000 members and donors, the organisation's purpose is to improve the welfare of farm animals at all stages of their lives (breeding, transport, slaughter). In this context, we pursue four main missions:

In addition to being a member of Eurogroup for Animals, we are also members of several organisations and coalitions in France: France Nature Environnement, la plateforme Pour une autre PAC and Engagement Animaux 2022. We are also part of various working groups led by the Ministry of Agriculture and Food in France (working groups on the transport of live animals, commission dedicated to animal welfare [CNOPSAV], etc.) and at the European Union level (EU Platform on Animal Welfare of the European Commission).

Welfarm is located in France. It is therefore quite naturally that it carries out most of its activities on the French territory; this does not of course prevent us from working also at the European level and developing our activities on an international scale.

At Welfarm, I am in charge of the Campaigns, Advocacy and Legal Department. With my team (Judith DEI ROSSI, Gwendoline FARIAS RANITO and Marie WANIOWSKI), we run campaigns to raise public awareness or challenge professionals about the conditions in which animals are raised, transported and slaughtered. In this context, we recruit, mobilise and coordinate the actions of Welfarm volunteers in France. We are in contact with institutional and national players in order to work towards the correct implementation of legislation and, above all, its development in a way that is favourable to farm animals. In particular, I represent Welfarm within the EU Platform on Animal Welfare organised by the European Commission. Finally, we support the association's legal affairs.

I joined Welfarm primarily because I have always been outraged by the way animals are treated all too often. The impartiality and the constructive and militant approach of Welfarm immediately appealed to me. As I hold a doctorate in private and European law, it was natural that I wanted to go beyond the lessons I had taught at university and the academic work I had published on animal law. I wanted to act on the ground with Welfarm. Our activities, the valuable skills of all the organisation's team and our findings on animal suffering never cease to motivate me every day.

Welfarm joined Eurogroup for Animals in 2001. When Welfarm was founded in 1994, the EU had only 12 Member States. Half of its Member States (the Northern countries) were advocating that the EU should raise its animal protection standards. The other half of the Member States (the southern countries, including France) were holding back the adoption of new texts in this area. It was therefore necessary to join forces with other European NGOs in order to coordinate our actions and have more weight in the debate. Eurogroup for Animals not only plays a valuable coordinating role, but also provides us with expertise on the functioning of the European institutions, which allows us to act appropriately throughout the legislative process.

Welfarm's actions and the progress to which it has contributed are difficult to list, as they are so numerous. However, we can mention:

Because independence is at the heart of our actions, our organisation depends solely on the generosity of the public. Anyone can therefore support us with donations, bequests, and legacies to Welfarm, name the organisation as the beneficiary of their life insurance, or sponsor the animals we care about in our rescue farm, La Hardonnerie.

It is also possible to support our current campaigns:

The awareness of animal suffering throws the individual into a world apart, which is at first a kind of nightmare. The important thing is to go through this suffering, to live it without fleeing its discomfort, but without remaining indignant, nor standing up against those who do not see it, by insulting them and being dogmatic."