Have you met Respect for Animals? 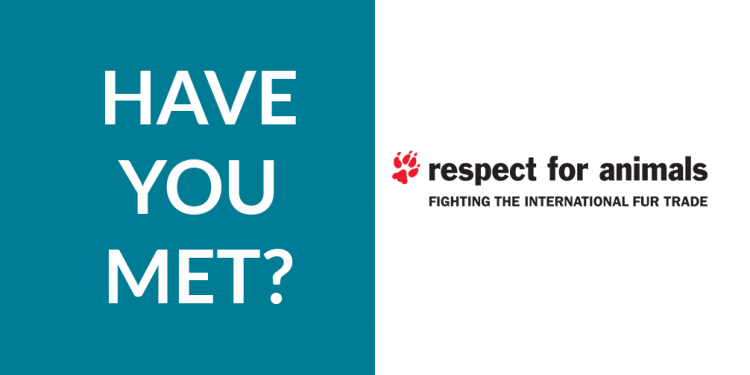 Have you met Respect for Animals?

This month we have the pleasure to interview Mark Glover, Respect for Animals director.

Tell us a bit about Respect for Animals and its main battles.

Respect for Animals is a dedicated and experienced anti-fur organisation with a good track record of success.

We led the campaign to end fur farming in the UK in 2000 and were at the forefront of the successful campaigns that led to the ending of the sale of both commercial seal products and dog and cat fur throughout the EU.

The fur industry remains a massive global industry responsible for the infliction of cruelty and deaths of tens of millions of animals each year. It is due to this horror that we took the difficult decision not to get involved in the many other atrocities that people inflict on animals, believing it is this single-minded concentration that has contributed to the successes we have been involved with..

In which countries is Respect for Animals present?

We are based in the UK but, through collaborations with like-minded NGOs, we have worked in many other countries and, in particular, we have worked, to good effect, in Ireland and are looking forward to continuing with this until fur farming is finally abolished there.

What about you? Tell us a bit more about your role within Respect for Animals and why you joined.

I first became interested in and committed to the fur issue while working as wildlife campaigner at Greenpeace in the UK. I saw what was achievable as, during my time there, I was involved with the successful campaigns to persuade the International Whaling Commission to ban commercial whaling and the European Community (as it was then) to ban the sale of ‘whitecoat’ harp seal pup fur. I left Greenpeace to set up the anti-fur organisation Lynx which launched a dedicated anti-fur campaign aimed, for the most part, at consumers. The campaign was a success but it attracted the venom and spite of the fur industry which launched a civil (libel) action targeting Lynx (and me) via the High Court. We lost (it’s a long story!) and were both bankrupted but, undaunted and even more determined, Lynx rose from the ashes as Respect for Animals and we have continued with the work since then.

As part of my job here I have seen the insides of fur farms as well as witnessing the Canadian commercial seal hunt for 6 years. The misery, suffering and deaths of the animals I have seen – all caused by greedy humans, lacking in any human decency - will live with me forever and drive me on to do more to try to end this unnecessary and extreme cruelty.

We joined Eurogroup for Animals earlier this year having seen a new dynamic and more effective organisation and direction. As an anti-fur organisation we were also keen to join in with and contribute to the discussions regarding fur and the campaign against it. We felt that our experience and commitment to the issue could be a positive contribution to Eurogroup for Animals’ work. We firmly believe that the European Union can be a significant forum and agent for positive change for animal welfare and that there are huge opportunities that we all have an obligation to explore and take advantage of.

What are Respect for Animals' main achievements this year?

This year has been particularly busy as we have launched our Fur Free UK (FFUK) initiative, aimed at ending the hypocrisy of the UK having banned the main methods of production of fur but still allowing the sale of these cruel products. We have worked with UK Members of Parliament supporting an ‘Early Day Motion’ calling for a ban on the sale of fur that achieved the second highest number of signatures for any such Motion in the current Parliamentary session. We have also submitted detailed responses to both a UK Department of the Environment consultation as well as the European Commission’s Inception Impact Assessment (both available via our website or from me (mark@respectforanimals.org).

Our work on the Fur Free Retailer campaign has seen more retailers join in and commit to never using real fur in their merchandise.

We have commissioned a new in-depth and authoritative report on the environmental impacts of the fur trade. For too long the fur industry has claimed it is sustainable and is accused of ‘greenwashing’. Our new report, which will be published before the end of the year, lifts the lid on this crucial issue and will be a major contribution to the campaign. It will be made available to all those working on the issue.

We have also begun to develop a strategy for banning fur farming throughout the EU, showing that the Commission’s argument that it has no jurisdiction in this area is simply not true.

How can the public act for Respect for Animals?

Respect for Animals relies entirely on public support. We have a good campaigning track record but are poor at fundraising so public help in this aspect of our work is extremely welcome.

Our retail (and Markets) campaigns also rely on the input of members of the public to be our ‘eyes and ears’ on the ground to see who is selling real fur and where. They are fantastic and are an integral part of the campaign.

We are also pleased that supporters and members of the public become involved by contacting their political representatives with the anti-fur message and information.

So much of this work is now carried and out and broadcast via social media and we urgently need supporters of the campaign to help us expand our reach using these platforms: facebook and twitter.

People can also join our email list by emailing us.

I firmly believe in the following. I have learnt that the suffering of those who have no voice and who rely on us cannot wait:

When is the right time?  If not now, when?  If not us, who?” - President Barack Obama adapted from Hillel the Elder