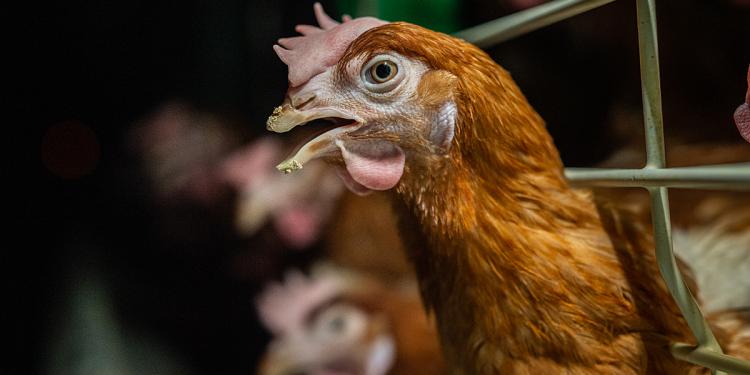 Our Member Organisation GAIA have sent an open letter in Flemish newspapers calling on the Flemish Animal Welfare Minister to finally ban caged systems for laying hens in Flanders. They also launched a poster campaign throughout the region to raise extra visibility for the issue.

In the previous legislature, Flemish Animal Welfare Minister Ben Weyts announced his intention to introduce a ban on cages for laying hens. Under the Flemish coalition agreement (animal welfare policy note, 2019-2024) the government undertakes to phase out these cage systems. Frustrated by these empty promises, GAIA sent an open letter to the Minister yesterday, urging him to introduce the ban:

You hold the key to open those thousands of cages and give millions of chickens a better life. Let them breathe, stretch their wings and lay eggs without a bad taste. “Think out of the box”, as you've done before, and put an end to this misery. The 3,000,000 Flemish chickens thank you.

In Flanders, more than 3.2 million laying hens are housed in so-called 'enriched' cages. In such cages, the space per chicken is approximately 1 A4 page with little free-range material. Conventional battery cages, in which chickens only have two-thirds of an A4 space, have been banned in the EU since 2012, but the so-called enriched cages, with about an A4 space per chicken, are still allowed. Wallonia already banned enriched cages in 2018.

More than 70% of Flemish people agree that keeping chickens in cages should be banned. Only 8% disagree with the ban, with the remaining 20% being neutral. This is shown by the opinion poll by Ipsos, which was conducted in April 2022.