From Farm to Pitchfork: farmers take to Brussels streets ahead of EU summit 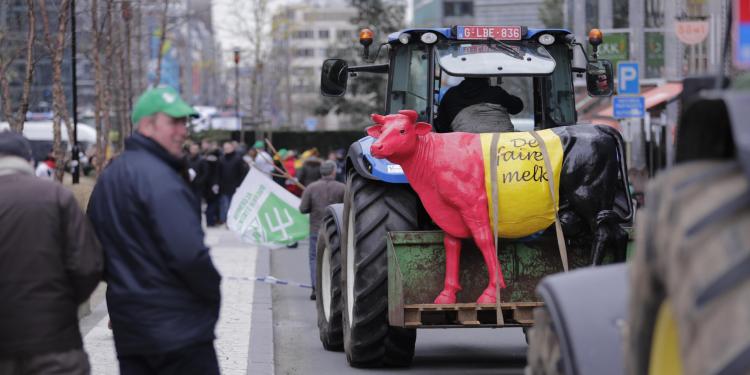 From Farm to Pitchfork: farmers take to Brussels streets ahead of EU summit

News
Farmers from across Europe fired up their tractors and drove to Brussels on Thursday (20 February), rallying against proposed cuts in the EU’s Common Agricultural Policy (CAP). They also demanded that the EU does not leave them out of the environmental transition requested in the Commission’s new flagship policy, the Green Deal.

Ahead of Thursday’s European Council, where leaders were trying to strike an agreement on the next EU long-term budget, farmers gathered in Brussels to speak out against the downsizing of the bloc’s main farming subsidies programme.

The ambition of making Europe the first climate-neutral continent by 2050 requires strong efforts from everyone, including the agricultural sector. But farmers feel they are the ones who will bear more weight on their back in making their production more sustainable with considerably less money.

Although agriculture spending still represents the lion’s share of the EU’s long-term budget, the CAP’s proposed allocation of €329.2 billion under discussion now is low compared to €383 billion in the current Multiannual financial framework (MFF) considering EU27 only.

In particular, the rural development support, the so-called CAP’s second pillar, was further trimmed by €7.5 billion in the last draft budget.

For Pekka Pesonen, secretary-general of EU farmers organisation Copa-Cogeca, the problem is that the level of ambition on agriculture at the EU level does not match the talks on financing.

“EU leaders expect farmers to deliver more, but then they actually take the specific tools for that policy area, the rural development, away from them and at the same time they cut the first pillar too,” he told EURACTIV on the sidelines of the protests.

“This sends the message that they expect farmers to deliver more but they are not going to pay for it,” he added.

European small-holders are well aware of the challenges we have to face, such as climate change, sustainability, animal welfare. But in order to be ambitious, we need means.
Marianne Streel, President of the Wallonian Farmers Organisation