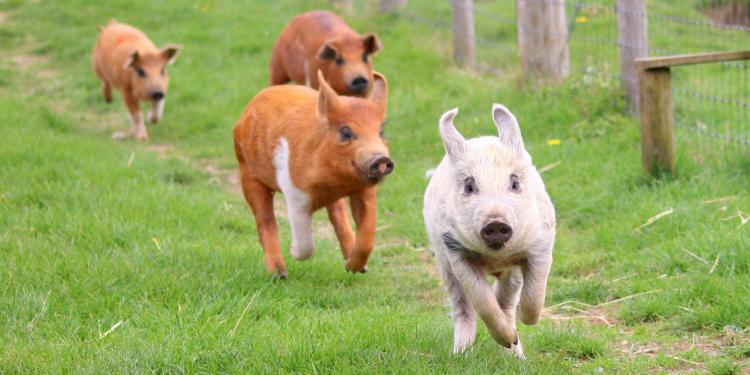 Press Release
The European Commission today committed to phase out cages in animal farming across the EU by 2027, making history for farm animals.

The Commission plans to prohibit cages for over 300 million hens, pigs, calves, rabbits, ducks, geese and other farmed animals every year, looking at a phase-out by 2027. EU Health Commissioner Stella Kyriakides and Commission Vice-President Věra Jourová made the announcement at a press conference covering the Commission’s response to the End the Cage Age European Citizens’ Initiative (ECI). The ECI, which is the first successful Initiative for farmed animals, was signed by an overwhelming 1.4 million EU citizens.

The Commission announced it intends to “put forward a legislative proposal by the end of 2023 to phase out and finally prohibit the use of cages for all the animal species and categories referred to in the initiative”. It will also address the issue of imported products from non-EU countries, committing to look at “introducing rules or standards for imported products that are equivalent to the EU’s”. By the end of next year, the Commission will evaluate the details of the legislative proposal that will be put forward in 2023, which will need to be adopted by the European Parliament and the Council of the EU to become law.

We’re thrilled by the incredible result of the End the Cage Age ECI. The European Commission’s commitment to ban cages across Europe will have a huge impact for millions of animals, with no animal left behind. This is an enormous success, and we want to thank all the 1.4 million EU citizens and the hundreds of organisations who fought for this historic moment
Reinkeke Hameleers, CEO, Eurogroup for Animals

The long-awaited day has finally come! Today, the European Commission made a historic  decision to leave a legacy for farmed animals. Citizens demanded change and the Commission received the message loud and clear, making an unequivocal and visionary commitment to phase out cages. The tide is finally turning. We will stay focused on the European institutions until they deliver on this ambition and will be vigilant in preventing vested interests from watering it down. Factory farming is the biggest cause of cruelty to sentient creatures on the planet. Ending the use of cages is a massive step towards ending factory farming
Olga Kikou, Head of EU at Compassion in World Farming

The End the Cage Age ECI launched on 11 September 2018 and closed exactly a year later, having gained over 1.6 million signatures. Following the required signature validation period, the ECI easily exceeded the required threshold of 1 million signatures, with a total of 1.397.113 validated signatures across Europe. It also outstripped the minimum number of signatures threshold in 18 EU member states, out of the seven required. This makes the End the Cage Age ECI the:

Making history for farmed animals has been a collaborative effort, where Compassion in World Farming has been leading a coalition of 170 NGOs from across Europe and rallied citizens from every corner of the Union.
End The Cage Age
European Commission
Deel op FacebookDeel op TwitterDeel op PinterestDeel op Linked InDeel op Whatsapp