Eurogroup for Animals calls the European Commission to stop the production, import and use of eCG in the EU 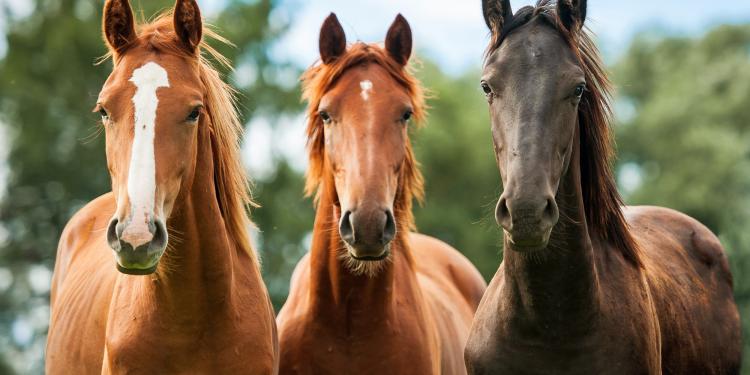 Eurogroup for Animals calls the European Commission to stop the production, import and use of eCG in the EU

Equine chorionic gonadotropin (eCG), also called Pregnant Mare Serum Gonadotropin (PMSG), is a hormone extracted from the blood of pregnant mares. It is used in intensive agriculture to increase the reproductive performance of farm animals such as pigs, sheep, goats and cattle.

Repeated investigations by our member organisation Animal Welfare Foundation (AWF) since 2015 have shown that the production of eCG entails serious welfare issues: up to a quarter of an animal's blood is routinely extracted at one time, resulting in weakness and anaemia. The blood is taken by force, which causes stress and fear. eCG used in the EU is mainly imported from Iceland, Uruguay and Argentina. In Iceland, semi-wild mares are repeatedly traumatised by violent handling and tight fixation in small boxes. In Uruguay and Argentina, mares are kept constantly pregnant and aborted to speed up the next pregnancy, as eCG is only produced in the early stages of gestation. In Germany, where a Haflinger stud farm has been extracting blood from pregnant mares for 40 years, 16 litres of blood are extracted per week, which poses serious health risks to the mares.

The use of eCG on farm animals also raises a number of concerns. In Europe, eCG is mainly used in pigs, to increase fertility and to stimulate and synchronise oestrus. The sows have no time to recover in between pregnancies, which leads to early slaughter. In addition, the use of eCG leads to bigger litter sizes. If the sows have more piglets than teats, surplus piglets often starve or are killed.

Procedures such as blood collections are classified at European and international level as animal experiments. Several alternatives to eCG are available on the European market making this hormone dispensable and in breach of the Three Rs principle (3Rs: Replacement, Reduction and Refinement) as provided by Directive 2010/63/EU on the protection of animals used for scientific purposes that applies in the EU and in the European Economic Area (EEA). Production of eCG in Germany and Iceland, both EEA countries, therefore violates EU law.

In brief, eCG production and use is cruel and unnecessary! To put an end to this practice, the EU must include strong animal welfare standards for the production of veterinary medicines in the revised Good Manufacturing Practice (GMP). Such provisions will ensure that eCG exporters into the EU, and domestic producers, must comply with these minimum standards. The revised animal welfare legislation should also introduce a clear ban on the use, import and production of eCG.
Blood farms
3Rs
PMSG
Horses
Argentina
Deel op FacebookDeel op TwitterDeel op PinterestDeel op Linked InDeel op Whatsapp