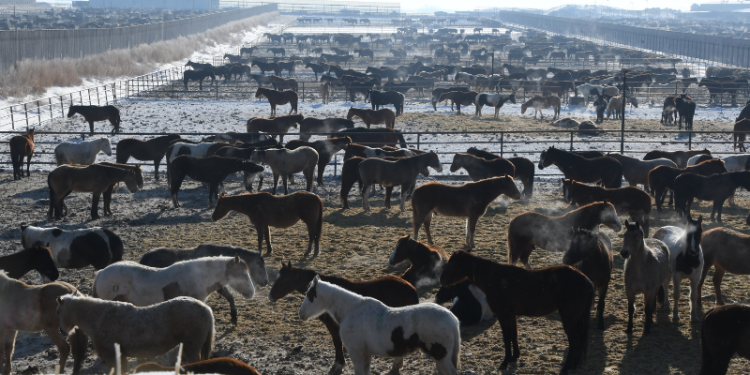 News
The EU is a net importer of horse meat and these imports are problematic as NGOs investigations and EU audits revealed massive problems with animal welfare and food safety. Eurogroup For Animals recommends using the tools offered by the EU-Canada Comprehensive Economic and Trade Agreement (CETA) to address and improve horse welfare in Canada.

The EU is the biggest consumer of horse meat, even if consumption - and imports - have decreased over the past decade for various reasons, including the 2014’s food scandal and the subsequent ban on Mexican horse meat. Yet, since 2017, they have been slightly increasing again, and Canada’s share has remained constant (around 1,350 tonnes yearly).

Even if this volume is relatively low, the horse welfare abuses detected in the production chains exporting to the EU are highly problematic. These significant shortcomings in the sector, not only on animal welfare but also on traceability, have been underlined by recent EU audit reports and by NGOs investigations. Furthermore, the EU legislation that imposes a six-month residency period, during which horses are not allowed to get any medication, has created many additional concerns in terms of horse welfare. During this residency period, the animals are kept in horrifying conditions in open-air feedlots, without any protection from the weather or veterinary care for six months until they can be slaughtered.

As animal welfare issues related to farm practices do not fall under the scope of EU animal welfare requirements currently imposed on imports, we call on the European Commission to maximise the opportunities offered by CETA and to seek for further cooperation with Canadian authorities under the CETA Regulatory Cooperation Forum (RCF) to improve horse welfare. Moving in this direction would respond to citizens’ expectations, as nine out of ten Europeans believe the EU should do more to promote animal welfare awareness worldwide. A petition, which has already gathered nearly 120,000 signatures, calls on the EU to suspend the imports of horse meat from countries where EU requirements on food safety and animal welfare are not respected.

If horse welfare fails to be addressed, the European Commission should be consistent and suspend these imports, while offering to discuss the identified shortcomings with Canada under the Sanitary and Phytosanitary Measures committee (SPS). In similar conditions, EU imports from Mexican horse meat were suspended in 2015.

Eurogroup for Animals calls the European Commission to stop the production, import and use of eCG in the EU
Fur Free Europe ECI - a final stop to fur cruelty
How you can support animal protection organisations in Ukraine
Beef production drives deforestation five times more than any other sector