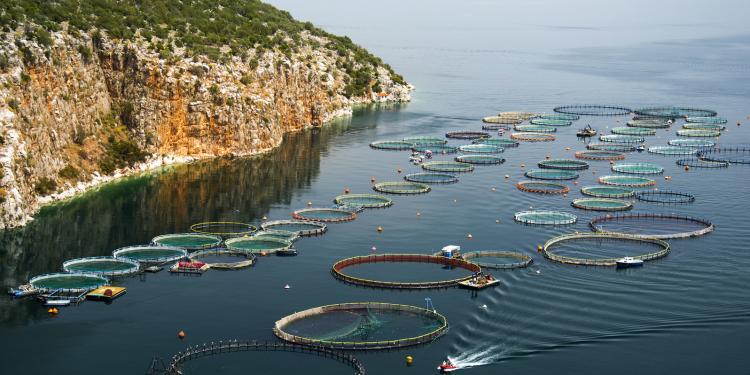 Over 1 billion fish are being raised on fish farms in the EU at any one time. These are undomesticated species quite new to being captive in production systems, which are often highly intensive and are themselves new technologies undergoing development.

While European aquaculture doesn’t have the transparency mechanisms to measure or report welfare conditions and outcomes, mortality rates of 15% to 20% are reported in cage farming in the mediterranean and in third countries that report mortality figures, and the Commission found very limited uptake of the effective stunning technologies commercially available for several fish species.

National aquaculture strategies and the implementation of EU financial support mechanisms need a smooth and coordinated implementation by Member States for subsidies to operate in support of policy initiatives and realise improvements in fish welfare.

When compared to terrestrial farm animals, scientists, producers, policy makers and animal advocates alike were late to understanding fishes’ needs and applying animal welfare approaches to fish in aquaculture. Some milestones were:

With the many EU and external research projects in the intervening years, we now have a wealth of knowledge for practical implementation. Initiatives from sector organisations, third party certifiers, and policymakers seek to apply knowledge to provide a better life and death for farmed fish, improve product quality and resource efficiency, and better meet consumers’ expectations.

In May 2021 the European Commission published its new aquaculture strategy until 2030 which includes fish welfare priorities including developing best practice codes and guidelines, setting validated indicators, providing training, and supporting a transition to lower-trophic species.

The Farm to Fork Strategy previously committed the EU’s aquaculture policy to being a part of its animal welfare initiatives, and in August 2021 the inception impact assessment of the revision of all EU farm animal welfare legislation included specific options for fish welfare.

The European Maritime, Fisheries and Aquaculture Fund (EMFAF) 2021 - 2027 regulation seeks to simplify Member States’ administration and programming. One approach to simplification is to only reference high level Union priorities such as sustainable economies and communities, and to maintain weaker links between national and EU aquaculture policies. Opening up the fund for investments to meet legal obligations has also weakened the incentive to invest it now in policy areas marked as important next priorities. This is where the link between the spending of EU funds and the delivery of EU policy is weakened.

Maintained from the previous regulation is the requirement that financial support is consistent with Member States’ own multiannual national strategic plans, and those plans must themselves use the EU’s aquaculture strategy as their basis. However there is no real requirement that national priorities contribute to specific EU objectives, or even that Member States update their national plans now. Then the EU’s aquaculture strategy is referenced as a more complete set of policy priorities, but there is less impetus for Member States to direct financial support for the delivery of EU policy priorities.

Aquaculture is not an area of exclusive EU competence and Member States operate national policies and licensing regimes specific to their varied geographical and market contexts. Member States should take the fish welfare objectives from the EU’s aquaculture strategy as priorities in their national strategies in support of the moves to advance animal welfare in aquaculture.

The Commission funds aquaculture research and facilitates Member States’ coordination of aquaculture policies, and it needs to do more to provide substance and cohesion for its aquaculture priorities. It needs to look beyond the small portion of the EMFAF that it controls directly and to activate mechanisms in other policy areas including animal welfare.

Animal welfare policy could consolidate knowledge into implementable indicators and guidelines through a dedicated Animal Welfare Reference Centre.The Commission could mandate EFSA to provide the necessary knowledge, since its last opinion on fish welfare was more than ten years ago.

The alternative path is that intensive aquaculture systems continue to evolve without accounting for the needs of the animals. Aquaculture takes the production and reputational losses that are seen with intensive terrestrial agriculture systems, and the fish continue to suffer unnecessarily.

The EU has identified the right fish welfare policy priorities, and they are aligned with voluntary measures being taken widely in the market. The new EU financial support regime (EMFAF) has weakened the explicit links between EU financial support and specific EU aquaculture policy objectives, but Member States can take up the common EU priorities and the Commission should use other mechanisms to provide the necessary resources and cohesion.