EU should not grant more access to Ukrainian chicken, eggs and dairies until animal welfare improves 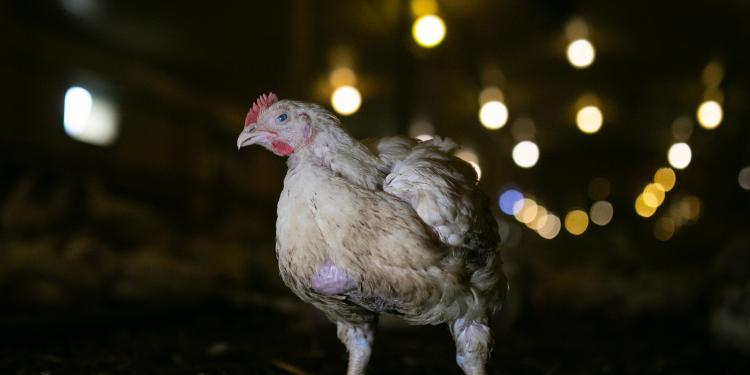 EU should not grant more access to Ukrainian chicken, eggs and dairies until animal welfare improves

News
The EU and Ukraine announced on 11 February that they will start consultations on the review of the terms of their trade agreement, including the provisions on market access. Eurogroup for Animals believes that Ukrainian animal products should not get further access to the EU market until Ukraine has implemented EU-equivalent standards.

Since the entry into force of the EU-Ukraine Deep and Comprehensive Free Trade Agreement (DCFTA) in 2016, EU imports of Ukrainian chicken meat, eggs and dairy products have more than tripled. Ukraine is now the EU’s first source of imports for unsalted chicken and eggs and egg products. Yet, there has been no concrete progress for animals in the country yet.

Ukraine committed under the DCFTA to approximate EU animal welfare standards and agreed with the EU it should have adopted legislation on this topic by 2019. However, the country has only just adopted a ministerial order for that purpose and the legislation displays clear weaknesses. For instance, it only imposes new rules as of 2026 for chicken and laying hen welfare - two key sectors exporting to the EU, and for calves and pigs, it excludes smaller farms from the application of new rules.

Considering the economic interests of Ukraine, the country is very likely to call for more preferential access for these animal products in the coming review of the DCFTA. Yet, the EU should refuse until the country implements higher animal welfare standards. The volume of the tariff-rate quotas available to Ukrainian chicken meat have already been increased by 50,000 tonnes, unconditionally, in 2019, to settle a dispute that arose between the EU and Ukraine as Myronivsky Hliboproduct (MHP) - the main Ukrainian poultry meat company exporting to the EU - was using a loophole in the agreement to import into the EU vast quantities of double-boned chicken breasts, which qualified as undefined cuts and thus faced no restriction in terms of tariff or volume, to be transformed into proper chicken breasts in the plant they own in the Netherlands.

The EU-Ukraine DCFTA has, over these past five years, fuelled very unsustainable productions, and thus a very unsustainable trade. Granting even more market access to Ukrainian animal products before animal welfare is improved on the ground would thus be incompatible with the objectives set by the EU in the Green Deal and in its Trade Policy Review. In addition to being detrimental to the welfare of millions of animals, it would also further undermine the level playing field, as EU producers already have to respect higher standards - and hopefully even better ones in the near future.

It would also be detrimental to EU consumers, who could be exposed to an increasing amount of lower animal welfare chicken meat, eggs or dairy products, while more than 90% of them are calling for such imported products to respect rules equivalent to those applied in the EU.