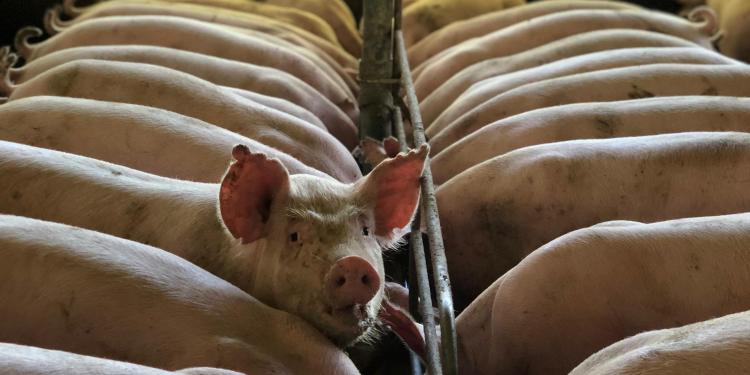 News
Study found a significant increase in EU investments flowing to the Chinese livestock sector following the introduction of new investment rules in China. In the absence of sufficient animal welfare related standards in the country, this practice harms the global transition towards sustainable food systems, and fuels the public health and environmental crises the planet faces.

In 2020, EU and EFTA-based investors owned shares worth around €4.5 billion across four of the largest Chinese meat and dairy companies: WH Group, Muyuan, Mengniu and Yili. With the introduction of new investment rules in China, investors like JP Morgan Asset Management Europe, Allianz SE and BNP Paribas significantly increased their shareholding.

In recent years, European livestock giants like Tonnies and Danone have also entered the Chinese market. Tonnies, whose core business is pork and beef processing, spent €500 million in 2019 on a slaughter and butchering centre in the Sichuan region, initially for two million pigs a year (rising to six million), while Danone earned almost €1 billion in profits from the 2021 sale of its stake in Chinese dairy company Mengniu. The Norwegian sovereign wealth fund, which holds the world’s biggest stock portfolio, also entered the market after the new rules were introduced, now owning shares worth approximately €437 million in these four companies.

The business opportunities may seem eye-watering, but a perfect storm of economic, cultural and regulatory issues that accompany EU investments into the Chinese livestock sector could lead to misery for millions of animals. China’s livestock sector is growing in the direction of greater intensification and automation, and the welfare problems associated with intensive livestock are well known and increase with scale. In addition to being detrimental to animal welfare, intensive industrial farming has a very negative impact on the environment (air, water and ground pollution), biodiversity (as related land-use changes often lead to habitat loss), public health (as intensive conditions tend to favour the spread of zoonoses and antimicrobial resistance) and climate change (as animals emit greenhouse gases, and also because of the related deforestation). Intensive farming also leads to huge volumes of waste (i.e. high level of water use, animal remains, excrement, water and soil pollution).

Without careful management and awareness of the welfare concerns associated with intensification and automation - and in the absence of further regulation in China - EU investments risk transforming China into a living laboratory for futuristic experiments in animal husbandry, with consequences that could affect the entire planet.

In that context, the EU-China Comprehensive Agreement on Investment (CAI) - which has not been ratified yet - is also a missed opportunity as it does not allow to address a situation where investments fostered under the deal would fuel unsustainable sectors.

To prevent such situation, Eurogroup for Animals thus calls on the European Commission, the European Parliament and EU Member States to: