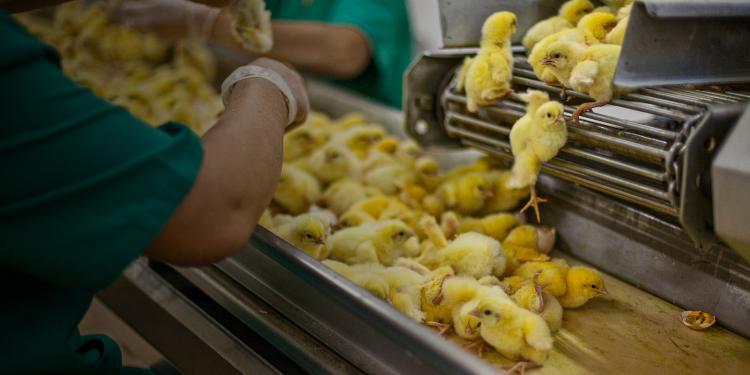 18 European NGOs have formed a coalition to demand the end of the killing of chicks and ducklings. This cruel practice is currently allowed under EU law but could be prohibited as part of the revision of EU legislation on farm “animal welfare,” which is slated to take place in 2023 - 2025.

In an open letter to the Council of the EU sent on 1 June 2022, the animal advocates urge the EU Ministers of Agriculture to support a ban on the systematic gassing and grinding of male chicks and female ducklings. EU citizens can also reach out to their Agriculture Minister with prepared draft messages via a new website launched today.

For every hen raised for egg production purposes, one male chick is ground or gassed. Male chicks are deemed “unproductive” for the egg industry, as they do not lay eggs, and their meat has no economic value for the meat industry. For this reason, 330 million day-old male chicks are eliminated annually. As early as a few hours after hatching, male chicks are first sorted by workers, and while female chicks are sent to lay eggs on farms, the males are killed. Tens of millions of female ducklings suffer the same fate, given that the liver of female ducks is less desirable for foie gras production, and as a result, foie gras producers only raise and force-feed male ducks.

The killing of young animals at such a massive scale remains a secretive industry practice, which explains why images are so rarely disclosed, although they are shocking. These images show the elimination of male chicks by grinding or gassing, the two killing methods allowed under EU law, with some countries preferring one method over the other.

In France, hatcheries have until the end of 2022 to transition to using in-ovo sexing devices and to end the systematic killing of male chicks. To ensure producers comply with the law, hatcheries have received 10 million euros in public funding to aid in transitioning to alternative methods. The cost of this new technology is estimated to increase the retail cost of eggs by only 1 cent per egg.

There are several reasons why a ban on the systematic killing of male chicks is attainable: the societal demand in support of a ban is high, alternatives to the systematic killing of male chicks exist, and two countries have already prohibited this practice. Last but not least, the revision of the EU legislation on the “welfare of farmed animals” represents an unprecedented opportunity to ban this practice throughout the EU.

The EU is currently revising its legislation on “farm animal welfare.” This revision is paramount. The European Commission, which is tasked with proposing a new legal act in 2023, is considering the possibility of prohibiting the systematic killing of chicks in the EU. Stella Kyriakides, the Commissioner for Health and Food Safety, who retains competence on the issue, said that “The killing of large numbers of day-old chicks is, of course, an ethical issue.”

Such a statement is largely supported by the results of the public consultation launched by the European Commission on the topic, as more than 94% of the almost 60,000 respondents declared they were in favor of a ban on the practice. Furthermore, these numbers resonate with public opinion, as only between 9 and 18% of citizens support grinding and gassing chicks and ducklings.

The European Commission will propose new legislation to better regulate practices in animal agriculture; however, the Council of the EU will decide on the adoption of the reform. It is therefore crucial that each of the ministers of agriculture from all 27 Member States support this reform, to ensure it is adopted.

For this reason, 18 animal protection organisations are asking each of the ministers of agriculture from the Member States to support the efforts undertaken by France and Germany. Specifically, the organisations ask the ministers to extend the prohibition on the killing of male chicks to all of the EU, and to ensure that the new law also prohibits the killing of female ducklings, who, so far, have been unfairly excluded from these reforms.