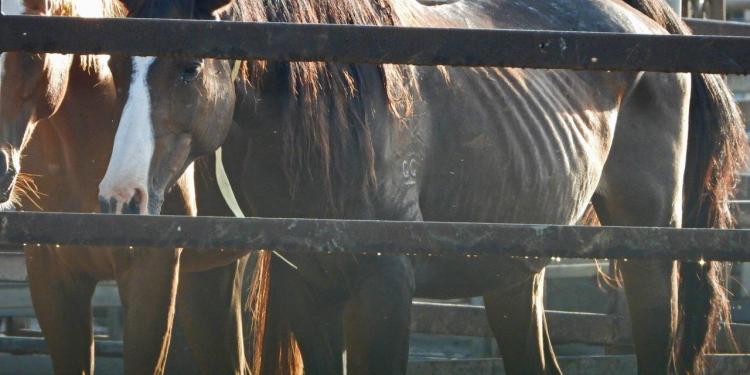 Together with several European and Australian animal welfare organisations and supported by Eurogroup for Animals, the Animal Welfare Foundation (AWF) calls for a suspension of horse meat imports from Australia.

Numerous investigations over the past two years, repeated EU inspections since 2007 and reports from Australian authorities reveal non-compliance with, or non-equivalence to relevant EU requirements.

Conditional suspensions of horse meat imports from Mexico and Brazil have already been imposed, following EU audits in these countries. Consequently, the same measure should now be imposed against Australia, since the last EU audit report from 2019 concludes that the recommendations regarding traceability of previous audits have not been properly addressed, in particular concerning the reliability of the medical treatment declarations of the horse vendors.

The European Commission must take action. We urge the EU Commission to remove Australia from the list of third countries from which the import of horse meat is permitted, as an immediate step, since Australia cannot guarantee compliance with, or equivalence to the applicable EU requirements (Sabrina Gurtner, AWF)

A film (watch the full length) published today by the Animal Welfare Foundation, supported by an Australian organisation, the Coalition for the Protection of Racehorses, shows the findings of a two-year investigation, including undercover footage. Up to eight cameras hidden inside the Meramist abattoir filmed the handling of the horses and the slaughter process on 22 separate days. The evaluation of the recorded footage shows systematic cruelty against horses. The analysis of their brands proves that the majority of the slaughtered horses are discarded racehorses, including those which have raced just a few days or weeks before.

Electric shocks into the genitals or the anus are routine. Horses that lie on the ground are also mistreated with electric shocks. Many horses are stunned incorrectly and receive several shots of the captive bolt pistol. It frequently happens that horses are still conscious when being hoisted for bleeding (Sabrina Gurtner, AWF).

The transport of the animals to the slaughter plants does currently not have to comply with EU standards.

More than 50% of the horses slaughtered in the Australian Meramist abattoir for export to the EU and Switzerland are discarded racehorses. “Racehorses are commonly administered drugs which must not be used in horses destined for human consumption”, emphasized Sabrina Gurtner.

An inquiry of the Australian senate, published in November 2019, points out that the existing traceability system does not meet EU standards. Racehorses are being processed at the export abattoir and this may potentially expose international consumers to chemicals that are known to have adverse health impacts when consumed by humans. The inquiry committee calls for a National Horse Traceability Register for all horses.

Another inquiry, commissioned by the Queensland Government and published in February 2020, states that the Australian animal welfare standards for both slaughter and transport of horses fall below international standards, such as those of the European Union and of the OIE Terrestrial Animal Health Code.

Gurtner adds that horses are transported in open cattle trucks over transport distances of up to 1,500 kilometres and on journeys lasting 30 hours. Exposed to the elements, horses endure temperatures of up to 40° Celsius. They are usually not supplied with water or feed. Furthermore, the horses are not transported in individual stalls, as required in the EU. If a horse goes down, they risk being trampled to death.

The international animal welfare coalition is calling on the EU Commission to place an immediate suspension on the importation of horse meat from Australia into the EU market.

It is unacceptable that a few importers make profit out of animal suffering and moreover put at risk the health of thousands of consumers (Sabrina Gurtner, AWF).

Fur Free Europe ECI - a final stop to fur cruelty
Eurogroup for Animals calls the European Commission to stop the production, import and use of eCG in the EU
Report concludes public health still at risk from mink farms in Denmark
Have you met Welfarm?

Fur Free Europe ECI - a final stop to fur cruelty
Eurogroup for Animals calls the European Commission to stop the production, import and use of eCG in the EU
How you can support animal protection organisations in Ukraine
Twelve Member States demand to end fur farming in the EU