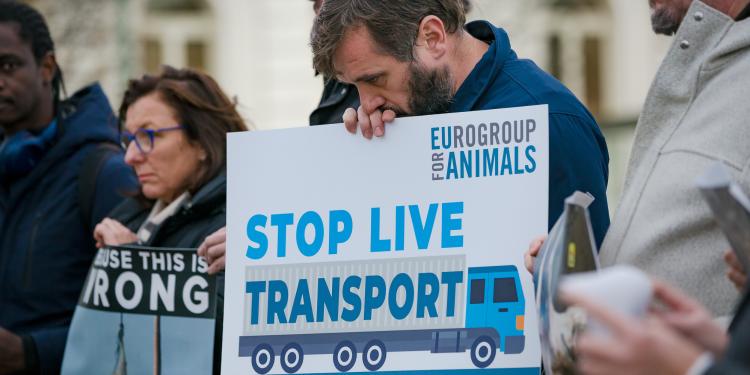 Press Release
Today the European Parliament voted on the Recommendation of the Committee of Inquiry on the Protection of Animals during Transport (ANIT), watering down an already weak text which won’t stop the suffering of billions of animals.

Stella Kyriakides, European Commissioner for Health and Food Safety, opened and closed the debate reminding the Members of the European Parliament (MEPs) that animal welfare is a priority within the Farm to Fork Strategy and, at the same time, a priority of her mandate and personally for her.

The European Commission (EC) is due to revise the Transport Regulation (Council Regulation (EC) No 1/2005) and will do it “based on the latest scientific evidence, creating a European database for official controls and auditing livestock vessels in Member States”, alongside making sure that the existing rules will be implemented. As such, a new legislative proposal is expected in the autumn of 2023, whilst executive acts relating to controls on sea transport (under provisions in existing law) will also arrive before the end of this year.

Some MEPs were quite vocal during the lengthy debate, calling on the EC to act now and put an end to the suffering of billions of animals, as reported in the Committee of Inquiry’s findings.

The December vote didn't address several key issues linked to the live transport of animals, within and outside the EU, and today the Plenary missed the opportunity to strengthen the text approved by the ANIT Committee.

We hoped that the European Parliament would step up the ANIT Report’s ambition and reflect citizens' views by banning any long-distance transport, and refining, replacing and reducing intra-EU transport.
Reineke Hameleers, CEO, Eurogroup for Animals

After decades of campaigning to stop the suffering of animals during transport, we are disappointed in seeing more failings from the vote.

The EP recommends that, in future legislation, journey time for domestic animals going to slaughter should, in principle, not exceed eight hours except transport by sea, which is deplorable (§ 87).

The EP also rejected amendments which would have forbidden the transport of pregnant animals at 40% of the gestation stage, and the call to ban the transport of very young animals (ovine, caprine or porcine, and domestic equidae) below the age of 35 days disappeared (§ 104). The limit of 4 weeks to allow transport remains only for calves.

We believe that the EP missed the chance to support systemic changes and failed in delivering citizens' demands. Now our hopes lie with the EC and we entrust it to enable the replacement of live transport by a meat, carcasses and genetic material trade only. Not “as much as possible”, as in the EP text.
Reineke Hameleers, CEO, Eurogroup for Animals