The Elbeik arrived in Cartagena (Spain): we urge the Spanish Authorities to relieve the 1,610 bovines still alive from their suffering. 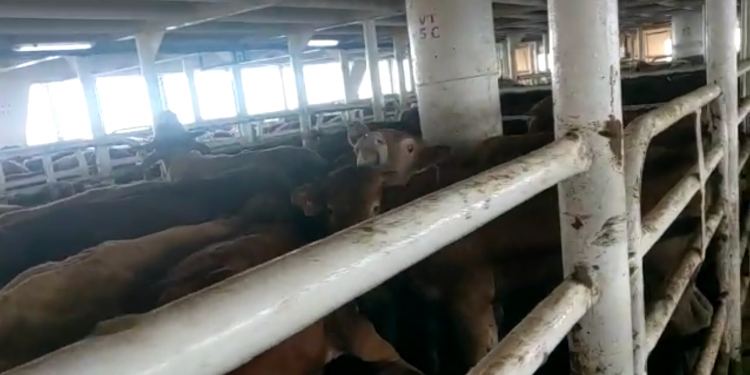 The Elbeik arrived in Cartagena (Spain): we urge the Spanish Authorities to relieve the 1,610 bovines still alive from their suffering.

Press Release
The Elbeik vessel, after three months at sea, was requested by the Spanish authorities to go to Cartagena. The same authorities knew that the animals were going to be rejected already back in December.

Exactly three months ago 1,776 bovines left Tarragona (Spain) to be exported to the Middle East. After having been refused upon arrival for suspected bluetongue disease, they have been crossing the Mediterranean without a clear destination.

However, they didn’t inform the European Commission (EC) of what was happening. Indeed the EC was only informed by the Italian veterinary services, reporting the situation near Cagliari (Italy), on February 18. At that time the two ships had already been wandering around the Mediterranean for two months.

Despite the fact that the Greek authorities in Crete provided the Elbeik with food for the crew and feed for the animals, there are concerns over the conditions of both after three months at sea.

The Elbeik has recently spent several days near the island of Menorca while the owner tried to find a buyer in a third country. Sources from the vessel assure that the Ministry of Agriculture, Fisheries and Food has not responded to their repeated requests to issue new health certificates, needed for the re-sale.

On March 16 the Spanish authorities issued an order requesting the vessel to dock at Cartagena to proceed with an inspection on the health and welfare status of the animals.

Only a few weeks ago the animals on board the Karim Allah, after veterinary inspection, were declared unfit for transport and therefore they were all killed. The mobile slaughter unit is still up in Cartagena.

The Transport Regulation requires that animals, before being transported, must be declared “fit for the journey” (Art 3(b)) and after so many months confined in a vessel without veterinary care and with feed shortage, it is very likely that the welfare of these animals is seriously compromised. Already 160 bovines died on board the Elbeik.

Eurogroup for Animals believes that these animals must not be re-exported, and calls on the Spanish Authorities to humanely relieve them from their sufferings as soon as possible.