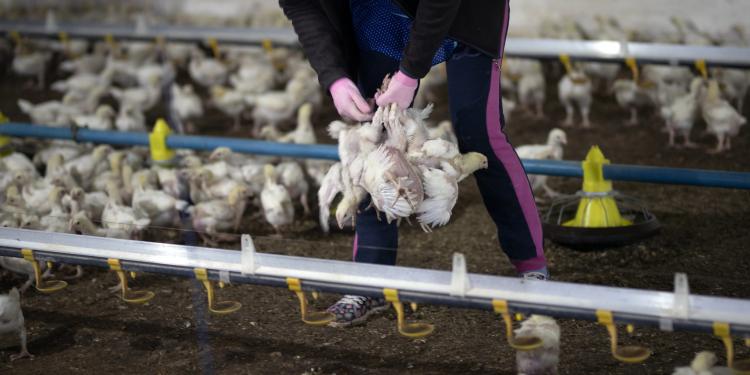 News
Handling chickens by their legs, as prohibited in the Transport Regulation, will finally be enforced in the Netherlands. An example to follow for the rest of Europe.

Thanks to the case submitted by Wakker Dier on April 29, the Dutch Trade and Industry Appeals Tribunal ruled that it is not allowed to handle chickens by their legs on farm and when loading and unloading the animals, as stated in the Transport Regulation.

This cruel practice however, is the common one used across the EU, even if this type of handling was prohibited for the past 15 years. Alternative methods, such as the Swedish one introduced by Eyes on Animals, could provide for a more humane approach.

After the court case, the Dutch Agriculture Ministry supported the Wakker Dier position and, as a result of their enforcement request, three catching teams in the Netherlands were checked and fined (each 1,500 euro) for not complying with the Regulation.

The Dutch chicken sector is working hard on this issue: which catching method to use, how to instruct and train trapping teams, and what time frame they need to properly implement it.

This decision, while causing a commotion in the Dutch chicken sector, could have important downfalls in other countries too. Indeed, without a Court of Justice of the European Union’s (CJEU) ruling it is only relevant in the Netherlands but it could definitely start the same conversation in other EU countries.

The Dutch government indicated that it will possibly bring this matter up at the upcoming Agrifish meeting (28 and 29 of June).

The Transport Regulation is at the centre of the current revision of all animal welfare laws and we call on the Commission to maintain the ban on handling chickens by their legs and ensure proper enforcement.

With our No Animal Left Behind campaign we will make sure that chickens are properly protected and we hope that other Member States will take the Netherlands as an example to follow.
Chicken welfare
Broiler chickens
Hens
Laying hens
Netherlands
Deel op FacebookDeel op TwitterDeel op PinterestDeel op Linked InDeel op Whatsapp