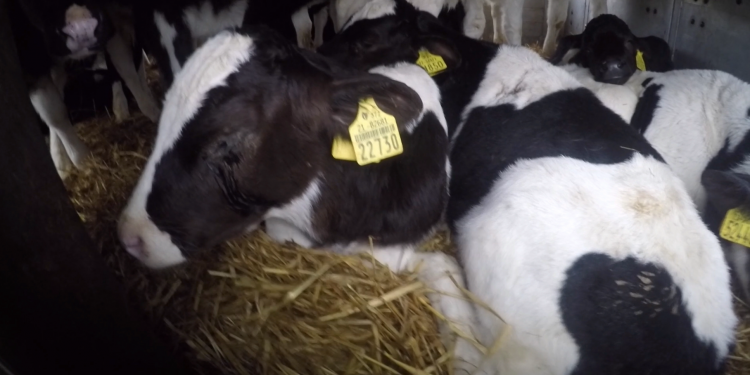 New investigation conducted by Eyes on Animals - in collaboration with Eurogroup for Animals' members Animals International, Animal Welfare Foundation and Welfarm - exposes the fate of Dutch cattle exported out of the country's territories.

Footage shows Dutch males bovines - born on dairy farms in Dwengeloo and Friesland - in a slaughterhouse in Beirut: animals were tied up, forced to fall down, and then had their necks sliced open, back and forth, with a knife. Moreover, this summer, Dutch cattle have been seen while loaded onto a vessel at the port of Cartagena (Spain) heading to Libya for slaughter.

Despite the good will of the Netherlands in not approving extra-EU export of its animals for slaughter, the export towards other Member States often means that these Dutch animals end up in non-EU abattoirs.

Slaughter conditions in Lebanon and Libya are known to be brutal. After having been transported for many days, very often animals arriving in the non-EU port, are in such bad condition that they cannot walk anymore. They clearly become unfit to continue their journey. However, instead of being euthanized, they are hoisted alive via a chain tied to one leg to be unloaded by the vessel. Once in the abattoirs, animals are chased, jumped on, have their tendons slit and eyes poked in order to keep them to the ground, chain them, and then cut their throats while fully conscious and fully sensitive to pain.

Eurogroup for Animals is urging the European Commission to ban any export of live animals from the EU to non-EU countries and to favour the slaughtering of animals close to the place where they are born.