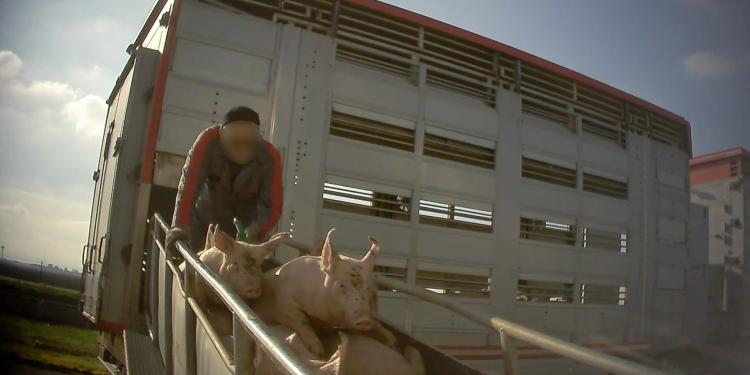 Through an undercover investigation, our Italian member Essere Animali revealed terrible violence on a pig farm supplying Beretta cured meats.
For 6 weeks, one of our investigators worked at a farm supplying the Fratelli Beretta brand, documenting terrible violence against pigs – even sick pigs – and extremely poor sanitary conditions. Some of the footage was broadcast on TG1 and handed over to the competent authorities in order to lodge a complaint against those responsible.

The images show a worker pulling out a pig’s teeth with pliers because he had been biting other pigs’ tails. A brutal and illegal operation, carried out without anaesthesia or subsequent treatment and which increases the possibility of having to resort to antibiotics. During transport, pigs are moved violently, kicked, hit with blunt objects, grabbed by the ears, lifted off the ground or thrown down by a tractor. As shown in the footage and confirmed by the words of the owner, whenever emergency kills on site are needed pigs are stunned using a captive bolt gun without immediately having their throats slit as required by law. This treatment causes pigs to endure interminable agony.

The sanitary conditions are also very worrying: the pigs are in constant contact with the wet floor that is covered with excrement. Their food is also contaminated with faeces, as the edges of the feeders are too low.