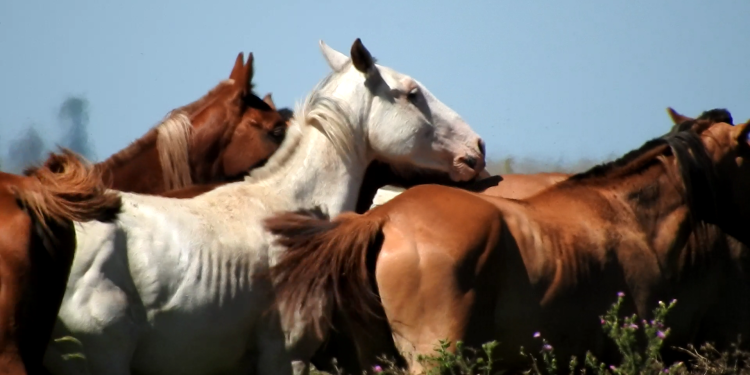 Industrial animal breeding relies heavily on the fertility hormone PMSG. In piglet production, the hormone makes sure that sows come into heat at the same time. PMSG primarily serves to synchronise work processes and increase efficiency. All sows can be artificially inseminated at the same time and give birth on the same day. Large numbers of piglets can be sent together for fattening and later for slaughter.

“PMSG is a booster hormone for industrial pig breeding. It provides for large litters at predetermined times”, explains Sabrina Gurtner, project manager of the Animal Welfare Foundation. This not only has serious consequences for pigs, but also for pregnant mares. The hormone is obtained from their blood.

Since 2015, the Animal Welfare Foundation (AWF) and Tierschutzbund Zürich (TSB) have been reporting about the cruel conditions on South American blood farms. As a result, four out of five European pharmaceutical companies have stopped the import of PMSG from South America.

New investigations of AWF | TSB from 2021 and 2022 in Uruguay and Argentina show once again how cruel the PMSG production is. Thousands of foals are still aborted, too much blood is taken from the pregnant mares at too short intervals, and injured and dying animals are left to their own devices.

One reason for the latest investigations was the fact that in 2019, the Argentinian company Syntex started marketing authorisation procedures for their PMSG product in Europe. After publication of serious abuse at the Syntex blood farm in 2015 and again in 2018, their PMSG was no longer purchased by European pharmaceutical companies. The Argentinian company is currently trying to come back to the European market, together with local distribution partners. Syntex has changed the name of their product from Novormon to Fixplan and started a new company in Ireland, Syn Vet-Pharma Ireland Limited. The authorisation procedure for Fixplan is running in several EU Member States. The product has already been approved in Ireland, France, Spain and Germany.

14 animal welfare organisations, supported by the European umbrella organisation Eurogroup for Animals, demand an end to animal suffering caused by the production and use of PMSG. On South American blood farms, up to ten litres of blood are taken from pregnant mares every week, for a period of twelve weeks, twice a year. “The foals are unwanted, that is why they are aborted. A lot of mares do not survive the late abortion around day 110 of pregnancy”, criticises Sabrina Gurtner. On the other hand, the fertility hormone also causes massive animal suffering in industrial animal breeding.

The PMSG advertising of pharmaceutical companies indicates that sows come back into heat faster after weaning, that the litter sizes are larger and the non-productive days are reduced. “With consequences for the pigs. The recovery periods between births are shortened for the mother sows, and more piglets are born than the sow can feed. Weak animals are often not capable of surviving and die”, says Sabrina Gurtner.

The animal welfare organisations from Germany, France, Spain, Denmark, Poland, Ireland, the Netherlands, Italy, Switzerland, Uruguay, Argentina, Canada and the USA, together with Eurogroup for Animals, call on the EU Commission to finally take action. “From today's perspective, PMSG is a hormone from the ideology of the 80’s. The idea at the time was to ensure food security for the population with cheap pork. Today, the massive negative effects of factory farming on animal welfare, human health, climate and environment are well known. PMSG is a booster for a misguided agricultural policy. A ban on PMSG would follow the logic of the European Green Deal and its Farm to Fork Strategy”, emphasise the NGOs and Eurogroup for Animals.

Based on these investigations and the ongoing serious concerns raised by the production and use of eCG/PMSG in the EU, Eurogroup for Animals calls the EU to build on upcoming legislative opportunities, including the revision of the animal welfare legislation, to introduce a full ban.

Watch the trailer and the documentary “PMSG – hormone of double misery” about blood farms in South America. 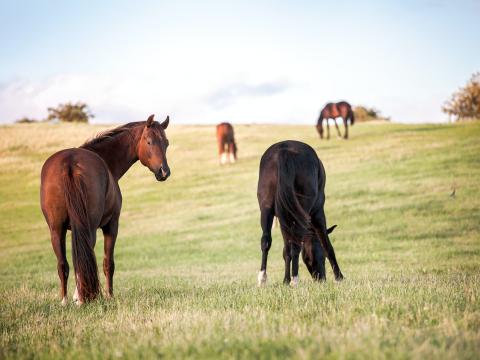 Equine Chorionic Gonadotropin (eCG) production, import and use in the EU

Commissioner Janusz Wojciechowski visits a horse shelter to discuss the protection of equines in the horse meat trade
Cruel hormone production in South America for European animal breeding farms
Eurogroup for Animals calls the European Commission to stop the production, import and use of eCG in the EU