COVID-19 is teaching us a harsh lesson: We need to change our relationship with animals 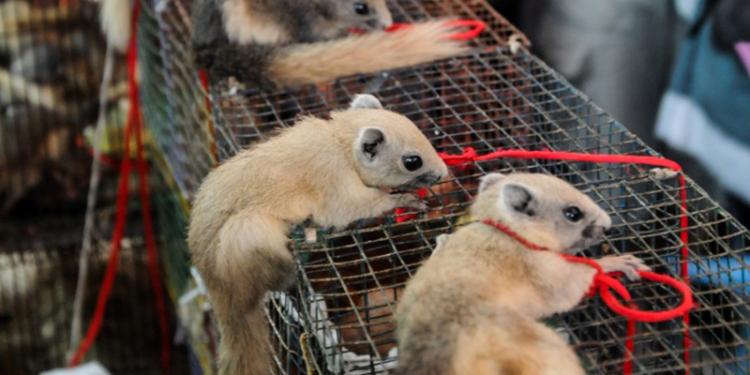 COVID-19 is teaching us a harsh lesson: We need to change our relationship with animals

COVID-19 was transmitted from wildlife to humans as a consequence of the sheer number of species sold in “wet” markets.

These are common across Asia, as in many developing countries across the globe, and sell all things perishable: fruits, vegetables and most notably animals – dead or alive, domestic and wild.

This time the pandemic came from Asia – but it could just as easily have originated here.

The EU is a major destination for exotic pets, including primates, reptiles, and amphibians. They are legally and illegally traded and transported to be sold and kept in EU citizens’ homes, with no sanitary controls. Traders don't adopt any of the precautionary safety provisions required in other EU industries. Animals may have been kept in conditions similar to those of Asian or African wet markets, before being transported to European houses. This is a time-bomb ready to explode.

Another major cause of the spread of animal diseases transmissible to humans – zoonoses – is pressure on biodiversity. Changes in land and sea use and loss of habitat for agricultural purposes, especially for the intensification of animal farming, cause more frequent and closer interactions between animals (farmed and wild), humans, and ecosystems. Zoonoses regularly emerge as a result of what is now, awfully, the norm in food production in most developed parts of the world: intensive farming.

Farmed animals kept by the billions (trillions, if we consider fish in aquaculture) are reservoirs and pathways for diseases that can be dangerous, if not devastating, for humans. In a report from 2008 on industrial farm animal production in America, the Pew Commission warned of the “unacceptable” public health risks posed by industrialised animal agriculture. A more recent study found that “since 1940, agricultural drivers were associated with >25% of all – and >50% of zoonotic — infectious diseases that emerged in humans, proportions that will likely increase as agriculture expands and intensifies”.

Quite apart from the horrendous impact of intensive farming on the animals themselves, its potential as a hotbed for zoonoses is devastating. Influenza A viruses, which can cause human pandemics, are hosted by the most farmed species worldwide: poultry and pigs.  Seventy billion chickens and 1.5 billion pigs are slaughtered every year in the world. Asian ‘bird flu’ strains H7N9 and H5N1 – which originated in poultry – have been responsible for most human illness worldwide, both in terms of severity and mortality.

Pigs can act as ‘mixing vessels’, becoming infected with both avian and human influenza viruses at the same time. If this happens, the genes of these different viruses can combine and give rise to a new virus capable of causing influenza pandemics. In 2009 an influenza A H1N1 virus with genes from pigs, poultry and humans caused the first pandemic for more than 40 years. It’s now a seasonal human flu virus that continues to circulate worldwide.

Viruses are not the only threat. Several zoonotic bacteria are hosted by farmed animals. The WHO estimates that, globally, 111 million yearly cases of foodborne disease are caused by various strains of E. coli, at least 95.5 million cases caused by Campylobacter, and 80 million cases of salmonellosis. To name but a few.

And that’s not all. Treating farmed animals against disease in intensive industrial conditions requires a massive use of antimicrobials, which contributes hugely to what the WHO has described as “one of the biggest threats to global health, food security, and development today” – antimicrobial resistance.

We've only got ourselves to blame.

Wild and domestic animals have carried viruses and bacteria for millennia. What has changed is the way we humans interact with them. The legal and illegal wildlife trade, urbanisation and the destruction of wildlife’s natural habitats for agricultural purposes, especially for the intensification of animal farming, are combining to push humans, wildlife and other animals closer than ever before.

But there’s hope on the horizon.

The current COVID19 pandemic has dramatically shown that the way we treat the animals who share our planet has consequences we can’t continue to ignore.

This year the EU has a great opportunity to show that the lesson has been learned. The European Commission is drafting two crucial components of the EU Green Deal: the Biodiversity Strategy to 2030 and the Farm to Fork Strategy. These two documents, if ambitious enough, can initiate a decisive change of direction of the EU policies on wildlife trade and agricultural practices respectively.

The new EU Biodiversity Strategy should include specific actions to fight wildlife trafficking and to effectively regulate the exotic pet trade in the EU, thereby protecting the health of EU consumers as well as global biodiversity from the risks posed by the currently poorly regulated trade in live wild animals. An EU-wide ‘Positive List’ stating which animal species are suitable and safe to be kept as pets – an instrument that is preventive in nature – should be considered. Such a list has already been successfully introduced in Belgium and Luxembourg, and is being developed in the Netherlands.

The Farm to Fork Strategy can and should play a very important role in protecting human and animal health in the face of the increasing risk of pandemics and antimicrobial resistance caused by intensive industrial animal agriculture.  Such a strategy should include concrete measures to promote a shift towards healthier, plant-based diets, higher-welfare animal farming practices that can drastically reduce the over-reliance on antimicrobial treatments, and farming systems and practices that can contribute to restoring biodiversity instead of impoverishing it.

The ongoing COVID-19 pandemic is teaching us a painful but necessary lesson: respect for animals and their habitats is integral to human health and welfare. If ever there was a time to be bold, that moment is now.