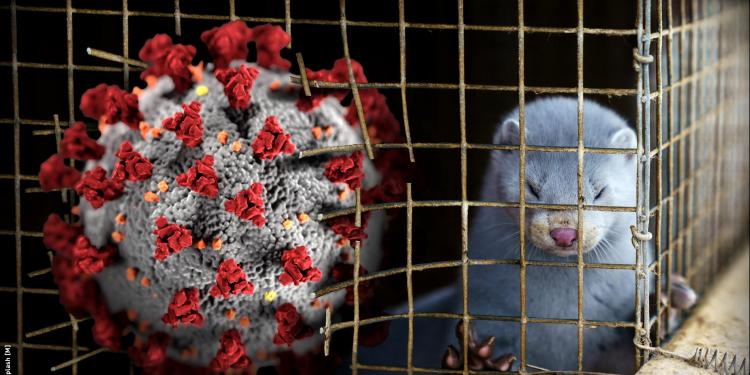 Press Release
12 months after the SARS-CoV-2 virus was first detected in animals in a mink farm in the Netherlands, the EU has failed to take decisive action to shut down these coronavirus reservoirs despite huge public support for a ban on fur farming.

In recent months, almost 500.000 people have signed a petition calling for an end to the cruel and deadly fur trade. A new survey also shows strong support for emergency EU action to put an end to fur farming and breeding, to protect the health of EU citizens and animals.

Throughout the past year, there have been outbreaks of SARS-CoV-2 (the virus that causes COVID-19 to humans) on more than 400 mink farms in ten EU Member States, with millions of animals affected. Given the living conditions on fur farms, once a single animal has been infected, the virus spreads quickly. It soon became evident that the SARS-CoV-2 virus could not only spread between farmed mink and mutate, but can also be transmitted back to humans and wildlife.

Fur farms pose a threat to public health and have the potential to become reservoirs for the coronavirus. A joint assessment from the World Health Organization (WHO ), the World Organisation for Animal Health (OIE) and the Food and Agriculture Organization (FAO) warned that there is a significant risk of COVID-19 being transmitted from mink to humans. Yet, despite this, the European Commission has remained mostly inactive.

“To date, the European Commission has only required the monitoring and reporting of COVID-19 cases on fur farms. It recommends the implementation of stricter biosecurity measures, including regular COVID-19 testing for fur farm employees and random sample testing of mink, as well as the testing of dead animals”, says Dr Joanna Swabe from Humane Society International/Europe, “These measures are, however, insufficient to protect public health. The only way to prevent the coronavirus spreading from mink to humans is to end mink farming in the Member States where this cruel practice is still legal”.

Not only can COVID-19 be spread from mink to humans, but Joh Vinding from the Fur Free Alliance explains that “With animals being kept in such close confinement under inherently poor welfare conditions, fur farms are the perfect breeding grounds for infectious disease. Viruses can also mutate. Indeed, mutations of the SARS-CoV-2 that occurred in mink on Danish mink farms were already transmitted to humans. Researchers feared that such mutations could reduce the efficacy of vaccines and significantly delay success in our battle against COVID-19”.

A recent opinion poll, commissioned by Four Paws and Eurogroup for Animals to YouGov, conducted in France, Italy, Bulgaria, Hungary, Estonia and Slovakia (1), has shown that EU citizens are in favour of emergency EU action to end fur farming and breeding, to protect their health.

The survey results show that the majority support our calls for urgent action. With such strong public support and the health risks associated with allowing fur farming to continue unabated, the European Commission must act immediately and urge Member States to halt fur production.

In Italy, a country which, while having suspended mink fur farming for 2021, still has operational farms, 77% of the adult population are in favour of the adoption of emergency measures to end fur farming and breeding. This illustrates that by allowing fur production to continue, the European Commission is more concerned with protecting the economic interests of a small group of stakeholders at the expense of the health of all European citizens.

“With the entry into force of the Animal Health Law on 21st April, the European Commission has a prime opportunity to take action against fur farming and eliminate this threat to human health once and for all”, says Pierre Sultana from FOUR PAWS Europe.

To draw attention to the issue, inform the public and reach out to policymakers, the Fur Free Alliance, Eurogroup for Animals and their members, together with FOUR PAWS and Humane Society International are holding a joint day of online action on 14th April.

The Fur Free Alliance exists to end the exploitation and killing of animals for fur. The Alliance is an international coalition that consists of more than 50 animal protection organisations, based in more than 35 countries around the world, working collaboratively to bring about the end of fur farming and fur trapping, using wholly peaceful means.

FOUR PAWS is the global animal welfare organisation for animals under direct human influence, which reveals suffering, rescues animals in need and protects them. Founded in 1988 in Vienna by Heli Dungler, the organisation advocates for a world where humans treat animals with respect, empathy and understanding. FOUR PAWS’ sustainable campaigns and projects focus on companion animals including stray dogs and cats, farm animals and wild animals – such as bears, big cats, orangutans and elephants – kept in inappropriate conditions as well as in disaster and conflict zones. With offices in Australia, Austria, Belgium, Bulgaria, Germany, Kosovo, the Netherlands, Switzerland, South Africa, Thailand, Ukraine, Hungary, the UK, the USA and Vietnam as well as sanctuaries for rescued animals in twelve countries, FOUR PAWS provides rapid help and long-term solutions.

With a presence in more than 50 countries, Humane Society International works around the globe to promote the human-animal bond, rescue and protect dogs and cats, improve farm animal welfare, protect wildlife, promote animal-free testing and research, respond to natural disasters and confront cruelty to animals in all of its forms.