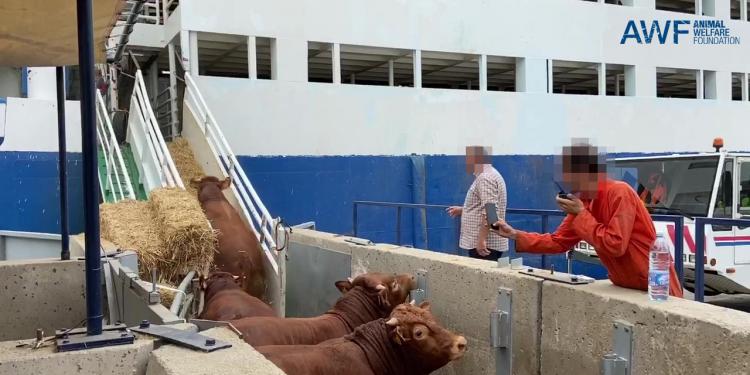 Press Release
Member States send all the wrong signals to the Commission, as EU citizens expect a ban on live exports and animals deserve better.

At the insistence of the Portuguese Presidency, Agriculture Ministers from across the EU today adopted formal Conclusions on animal welfare during sea transport to third countries, a formal expression of the opinion of all 27 Member States, but one that risks hindering progress.

Better rules for live sea transport won’t mitigate the serious risks associated with this outdated trade. Recent incidents as well as a recent new study by our member Animal Welfare Foundation (AWF) and Robin des Bois on EU- certified livestock carriers proved, once again, that live animal export is not a correct practice with regards to animals, humans and the environment.

While the fitness check process is still ongoing, today’s Conclusions also demonstrated added impetus for a new Transport Regulation. The Council still “invites the Commission to submit a proposal for a revised regulation on animal welfare during transport, if possible, sooner than indicated in the Farm to Fork Strategy'', which is more than welcome.

At the same time though, the Council stresses the need to prioritise short term improvements and monitoring, in order to improve the implementation of the current Regulation.

While Eurogroup for Animals welcomes short-term improvements to relieve the immense suffering of animals, it believes that the revision of the Transport regulation should introduce a much shorter maximum journey duration for animals as well as a ban on live exports. Such an approach would fit with the objectives of the EU’s Farm to Fork strategy to significantly shorten supply chains.

In this respect, we applaud the German, Dutch and Luxembourgish Ministers who presented a paper stating that these Conclusions can only be considered as short term measures, but want to see live exports ended through the forthcoming legislative revision.

As stated in the Conclusions, “animal welfare during transport is a priority at EU level and should be ensured at all levels and stages of the journey during the international long-distance transport of live animals including to third countries, while favoring, and supporting, as far as possible, the transport of genetic material and meat”.

We trust the European Commission will keep working on the revision of the Transport Regulation and towards phasing out live exports. The shift to meat and carcasses trade is the only way forward to protect animals, people and the environment. The Council Conclusions are simply unwelcome, unhelpful and unnecessary.

Summary of the Accountability Report

A strategy to reduce and replace live animal transport