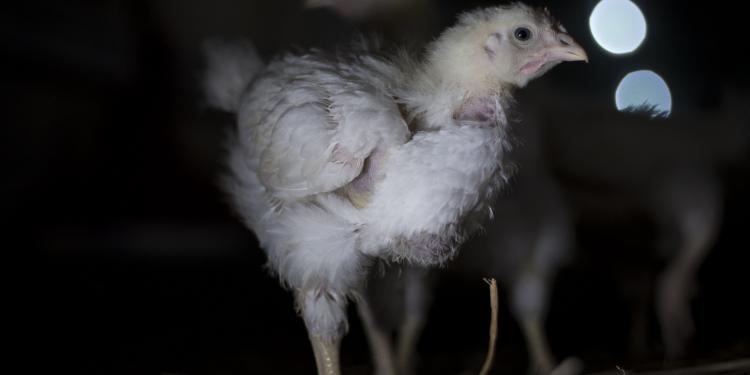 Opinion
Ukraine is taking a long time to meet its commitment to align its animal welfare standards with the EU. Could a compromise on chicken breasts be the EU’s chance to push for higher standards to be implemented quicker? Instead, though, they’re considering lending money to the worst offender.

This week the EU and its six Eastern partners - Ukraine, Armenia, Azerbaijan, Belarus, Georgia and the Republic of Moldova - celebrate the tenth anniversary of the Eastern Partnership. The EU has negotiated several association agreements in the context of this partnership, notably the EU-Ukraine Association Agreement which included a Deep and Comprehensive Free Trade Agreement (DCFTA).

This agreement, which provisionally entered into force in January 2016, granted Ukraine substantial trade preferences on animal-based products while committing the country to align its rules, notably on animal welfare, with the EU’s.

A surge in animal products imports from Ukraine

As a result, between 2016 and 2018 imports of Ukrainian animal-based products into the EU almost tripled. Poultry meat imports increased from 35,529 to 105,813 tonnes, imports of eggs and egg products from 2,125 to 5,731 tonnes, and imports of dairy products from 1,133 to 6,605 tonnes. The increase in Ukrainian imports of poultry meat into the EU is mostly due to Ukrainian producers abusing the trade preferences granted to ‘other cuts’ - which are fully liberalised - by sending double-boned chicken breasts to the EU duty free. These are then cut in a Netherlands plant before being distributed on the European market as chicken breasts.

This forced the European Commission to request a renegotiation of the DCFTA, reaching a compromise by increasing the volume of poultry legally accepted in the EU. This increase means in turn an increase in the amount of lower animal welfare chicken meat imported into the EU.

In exchange for granting more generous access to such sensitive products, Eurogroup for Animals calls on the European Commission to put more pressure on Ukraine to align its animal welfare standards with those applied in the EU. While Kyiv is reported to be close to adopting legislation that approximates about 95% of EU animal welfare laws for farm animals, broiler chickens, laying hens, pigs and calves, the transition period foreseen for such legislation are also rumoured to be extremely long. In fact, the date mentioned by officials is 2026.

To add insult to injury, the Ukrainian poultry producer MHP, the company responsible for the abuses that led to the renegotiation of the trade agreement and the main Ukrainian company exporting to the EU, has requested another €100 million loan to the European Bank for Reconstruction and Development (EBRD), which should be discussed on 22 May. As the EBRD has the strongest requirements on animal welfare among international banks, impelling its grantees to respect EU standards, it should make sure MHP’s entire value chain respects the animal welfare standards contained in the EU Broiler Directive (EC 2007/43).

An evaluation of MHP made after initial loans in 2010 stated that improvements had to be made in terms of animal welfare. However, there is no report on what has been achieved to correct this situation. Action plans drafted by the EBRD have not covered animal welfare so far.

Eurogroup for Animals calls on representatives from the EU and EU member States at the EBRD to seriously reconsider granting such a loan to MHP, taking seriously into consideration animal welfare standards respected throughout the entire value chain owned by MHP, as well as the impact its mega farms have on the environment. Public money of European citizens should not fund inhumane practices that they reject at home.

Read the letter sent by Eurogroup for Animals to Commissioner Katainen and Malmström.