Consumer poll shows: Over half of adults say they would like to try cultivated meat 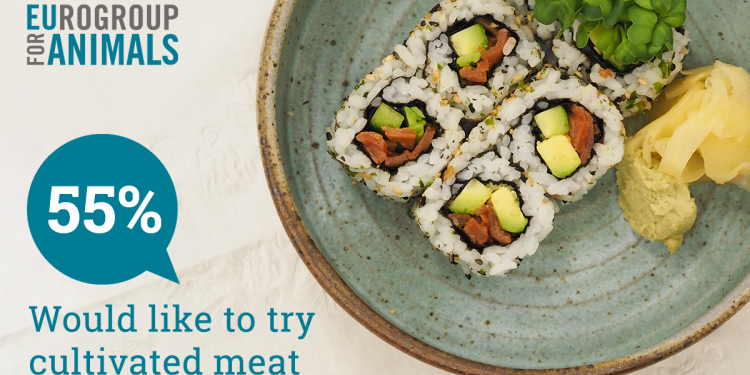 Consumer poll shows: Over half of adults say they would like to try cultivated meat

News
Food sustainability and animal welfare standards are key areas of focus for Eurogroup for Animals.

According to the UN’s Food and Agriculture Organisation (FAO), the live-stock sector is responsible for 14.5% of greenhouse gas emissions. Amongst other solutions, cultivated meat has been proposed as a method for countering this problem. If all meat produced in the EU-27 was replaced by cultivated meat, research indicates that this would significantly reduce greenhouse gas emissions, land use and water use by 98.8%, 99.7% and 94% respectively, compared to current meat production practices.

In addition, some argue that the introduction of cultivated meats to the market would position animal suffering in food production as unnecessary, even to meat eaters. The European Commission has also noted that a 2018 independent report identified the development of new meat alternatives as an important pathway to achieving the Commission’s Food 2030 initiative, to deliver a sustainable European food system. Cultivated meat could play a key role in this.

This is why Eurogroup for Animals commissioned market research company Savanta ComRes to conduct research in six European countries (France, Germany, Italy, Spain, Poland and Finland) in order to better understand public awareness and perceptions of cultivated meat as a new topic in the public domain. Additionally, the research aims to explore public attitudes to this new alternative to animal meat and establish a benchmark study.

Results from this survey show that whilst awareness of cultivated meat across EU countries surveyed is generally good, understanding of how this new category of meat is made is still relatively low. Around half of those in the EU countries surveyed say they would be likely to try this new category of meat, with the two most appealing factors about making this change from traditional meat are related to reducing the impact on the environment and the number of animals killed. Cultivated meat could therefore be positioned as a viable alternative to animal meat, and to the environmental impact of the meat industry.

Eurogroup for Animals calls the European Commission to stop the production, import and use of eCG in the EU
How you can support animal protection organisations in Ukraine
Happy World Wildlife Day!
Beef production drives deforestation five times more than any other sector