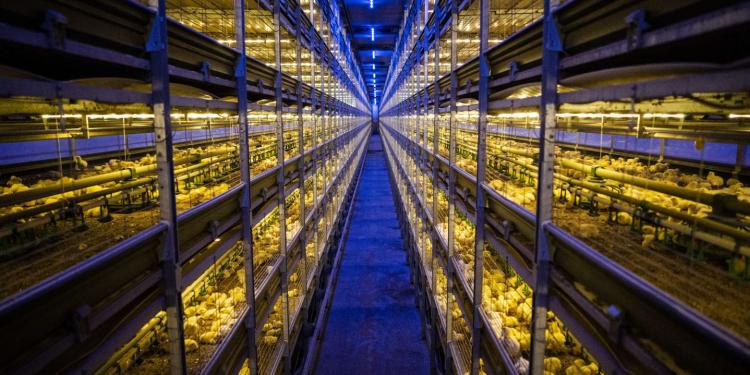 News
The Netherlands has a model for intensive farming that raising concerns. In the quest for efficiency, the welfare of farm animals is often reduced solely to a health issue.

The exterior is austere: two large, airy, airy, windowless rectangles in the middle of a plain. Inside, after entering an airlock and donning a protective overcoat, a perspective seizes: in a semi-darkness, immense rows of steel shelves appear, on six levels, lit by small LEDs. A pungent smell stings the nose, that of the ammonia released by the droppings. And then, despite a deafening noise from a wind tunnel, there is a continuous squeak: that of thousands of chicks. They are 160,000, 5 days old, arrived on this farm still in their shell, directly from the hatchery.

They will stay between thirty-two and thirty-six days in this building, just enough to reach the standard size of 2 kg to 2.5 kg before being sent to the slaughterhouse. Without having known anything other than their LED shelf. After them, a new batch of chicks will come to take their place ... A rotation repeated seven to eight times a year.