The case against octopus farming 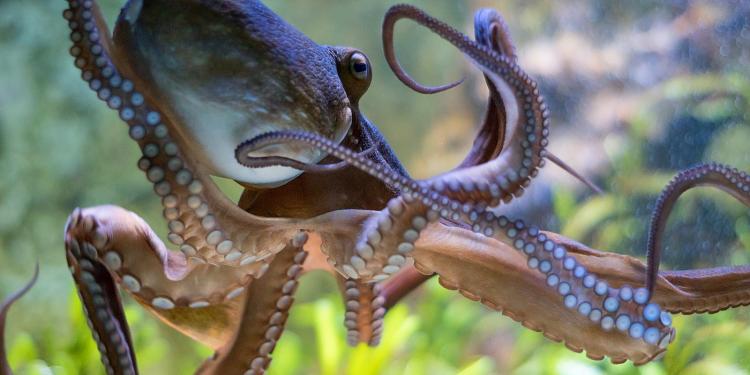 The case against octopus farming

News
For ethical and environmental reasons, raising octopuses in captivity for food is a bad idea.

Octopuses stand out among invertebrates for their complex behavior. They are capable of problem-solving, mimicking their surroundings using color changes that take place on a scale of seconds, outwitting predatory sharks, discriminating individual humans, engaging in playful behavior, and hunting in response to cooperative signals sent by fish. As these patterns of behavior suggest, octopuses (as well as some other cephalopods) have sophisticated nervous systems and large brains.

Given their exceptional abilities, one might ask whether humans should be eating octopus at all, but here we want to raise a different ethical question. As global demand for octopus grows, especially in affluent markets, so have efforts to farm them. We believe that octopuses are particularly ill-suited to a life in captivity and mass-production, for reasons both ethical and ecological.

Sheep were probably the first animals domesticated by humans for food, starting at least 9,000 years ago. Goats, cows, pigs, and chickens followed. In the twentieth century, in tune with economics and the norms of the Industrial Revolution, a factory model was applied to farming these animals, which facilitated an extraordinary increase in the number of animals produced for food. Factory farming also led to concerns about animal welfare and environmental impacts, including habitat loss, excessive use of fresh water, and pollution.