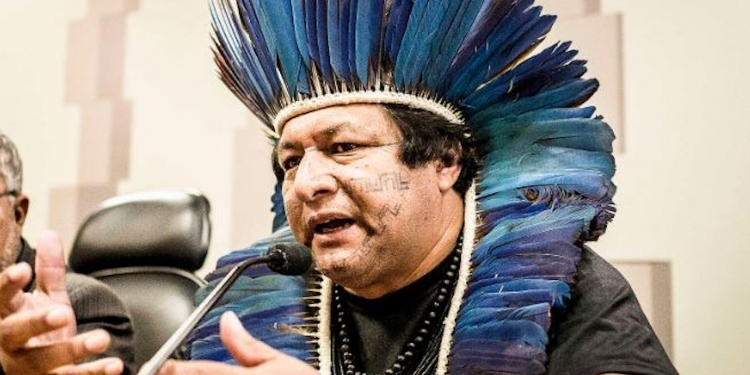 News
Eight Brazilian indigenous leaders came to the European Parliament in Brussels to urge politicians and companies to help stop the destruction of the Amazon rainforest on Tuesday.

The indigenous leaders are travelling through 12 European countries with the campaign ‘Indigenous Blood, Not a Single Drop More‘ to testify about the human rights violations in the Amazon, as a result of the worldwide want for raw materials and agricultural land causing deforestation to increase at a rapid pace. In 2017 and 2018, 135 indigenous people that have tried to stop it, have been killed, reports VRT NWS.

“We no longer have the support or protection of our government, which is why we have to ask for help from other countries,” said Nara Baré, one of the leaders, reports De Morgen. “You are partly responsible. As the consumption of wood, beef, sugar, soya and cocoa increases, our President takes our land away from us and rents it out or sells it to international farms. And Belgium cannot hide behind the fact that it is a small country,” she added.

Belgium is the seventh biggest importer of Brazilian wood, and the Belgian demand for soya, mainly used for meat production, is now using 80% more of the rainforest than it did six years ago. Belgium imports 2.5 million tonnes of soya a year, for which 2.7 million hectares of agricultural land is needed for production, reports De Morgen.