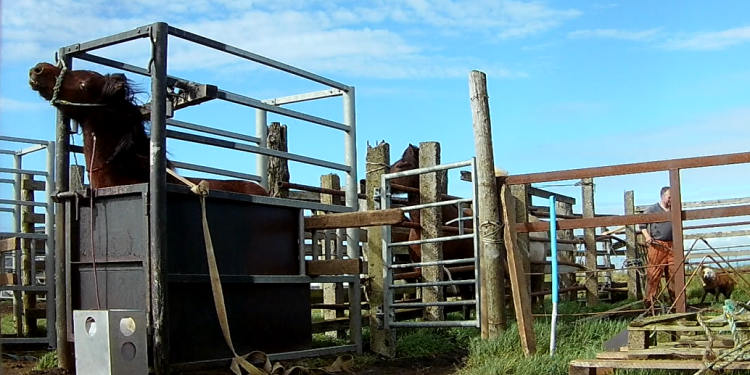 News
On Monday 28 March, Eurogroup for Animals, jointly with 16 animal protection organisations, filed a complaint with the European Free Trade Association (EFTA) Surveillance Authority regarding blood farms in Iceland, as they are in breach of laws applying in the European Economic Area (EEA).

In November 2021, an investigation led by Animal Welfare Foundation and Tierschutzbund Zürich revealed the cruel conditions on Icelandic blood farms. There, blood is collected from pregnant mares in order to retrieve the pregnant mare serum gonadotropin (PMSG) hormone, also called equine chorionic gonadotropin (eCG), which is used in industrial animal breeding to increase the reproductive performance of farmed animals.

On Icelandic blood farms, the semi-wild horses are subjected to violence, risk numerous injuries, and suffer from repeated trauma. The amount of blood taken - five litres per week - exceeds any international guidelines existing on the topic.

Following these findings, Eurogroup for Animals has decided, jointly with 16 animal protection organisations, among which several are based in Iceland, to file an official complaint with the EFTA Surveillance Authority, arguing that Iceland does not properly apply its legislation on the protection of animals used for scientific purposes, which is derived from the EU Directive on the same topic. Indeed, Iceland, as a member of the European Free Trade Association (EFTA), must follow the rules of the European Economic Area (EEA), most of which are aligned with EU rules.

The argument laid down by the complaint is that blood collection for the production of PMSG should not be approved by the Icelandic authorities as it does not respect the principle of the 3 Rs (replacement, reduction and refinement)  on which is based the relevant EU Directive, and thus the Icelandic law, on the protection of animals used for scientific purposes. Indeed, according to this principle, animal experiments must, whenever possible, be replaced by alternative methods not relying on live animals.

In the case of PMSG, these alternatives exist as a number of authorised synthetic medicinal products are available on the pharmaceutical market. Achieving good reproductive results is also possible with informed management techniques and hormone-free methods, as adopted in organic farming. The Swiss pig breeders association even stated that they will voluntarily stop using PMSG, proving that this transition is feasible.

Icelandic authorities argue that they do not see blood collection for PMSG production as an animal experiment - and therefore that this activity does not fall under this legislation and does not require any authorisation. Yet, EU authorities, as well as the World Organisation for Animal Health (OIE), have said the contrary at numerous occasions. Indeed, procedures using animals for the manufacture of drugs are classified as animal experiments.

The EU is the main destination for Icelandic PMSG and the hormone, in addition to being produced in cruel conditions, only further supports an intensive and unsustainable model of livestock farming, which goes against the goals listed in the European Green Deal, and more specifically the “Farm to Fork Strategy”. This complaint is thus crucial, alongside our call for the EU to ban production and imports of this hormone.