Big European banks fund drivers of animal cruelty, habitat destruction, and wildlife loss in the Amazon and beyond 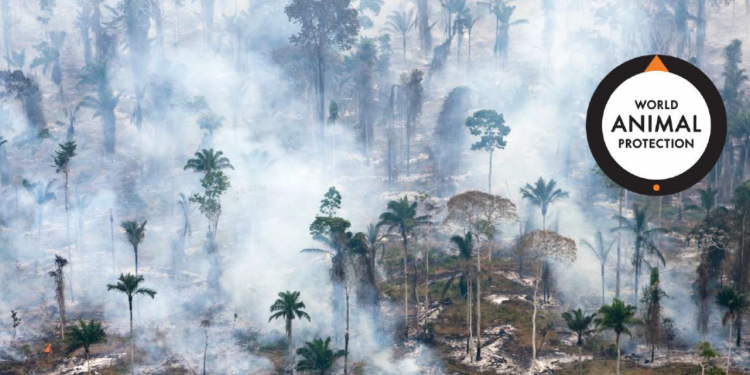 Big European banks fund drivers of animal cruelty, habitat destruction, and wildlife loss in the Amazon and beyond

Major financial institutions across the European Union are investing in companies at high risk of being linked to deforestation in the Amazon and Cerrado, thereby exacerbating climate change, biodiversity loss, public health risks and farm animal cruelty on a massive scale. As it stands, the EU-Mercosur Free Trade Agreement will only further fuel this trend.

According to a new report published by World Animal Protection, the EU’s top ten financial institutions, such as ABN AMRO, Santander and ING Group, are massively bankrolling companies linked to cattle and soya supply chains which are operating in areas of Brazil where rainforests and savannah are being cleared - legally or even illegally - to produce meat and crop-based feed.

Over the past five years, these financial institutions have invested up to €81 billion in companies such as Cargill/Danone, ADM, Bunge, Carrefour, Casino, Lactalis, JBS, Louis Dreyfus and Marfrig, meaning that EU consumers are unknowingly fueling these unethical and carbon-intensive business practices with their savings and pensions.

At no cost should our world’s most precious rainforests be cashed in for greed, banks have a duty to their customers to invest their funds responsibly and ethically. Reputable names in household banking are betraying their customers’ trust and investing into morally corrupt business – those that destroy habitats, displace wildlife, and participate in the very cruellest of businesses – low-welfare, factory farming.

The conclusion of the EU-Mercosur Free Trade Agreement has shone a light on deforestation in the Amazon, where an area the size of three football pitches is lost every single minute to agricultural use. The Amazon is home to millions of species of sentient animals that suffer when their habitat is lost. At least 17% of the beef and 20% of the soy exported from the Amazon and the Cerrado to the EU may be “contaminated” with illegal deforestation. This soy is often fed to the 70 billion animals that are globally farmed for food each year, two-thirds on factory farms in conditions impeding them to move freely or live naturally.

The trade agreement concluded by the EU and Mercosur in June 2020 will only aggravate this. According to an impact study published in France, the agreement would generate an extra 25% of deforestation each year in the six years following the entry into force.

The EU should not ratify the EU-Mercosur agreement without fundamentally renegotiating its terms. As it stands, it is a poor deal for animals, the planet and the people, and it is not in line with the strategies adopted by the EU under the Green Deal. This agreement will further fuel the intensification of animal production, and this trend, in addition to being detrimental to animal welfare, also contributes to issues like habitat loss for wild animals, the spread of zoonoses, deforestation, the climate crisis and antimicrobial resistance. A simple declaration or protocol will not fix it, the EU needs to entirely change its approach when it comes to trade policy.

Eurogroup for Animals and World Animal Protection call on financial institutions to right this wrong, by ensuring they have policies and systems in place such as:

The Mercosur agreement should be renegotiated in order to include amongst other things: