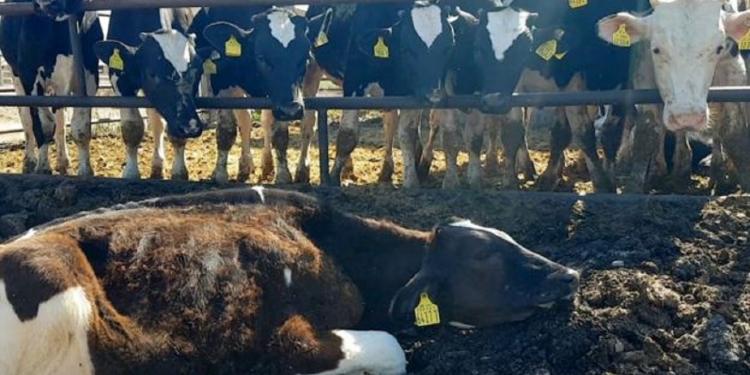 Eurogroup for Animals’ member organisations, Animal Welfare Foundation (AWF) and Animals International, gathered footage this summer, which for the first time confirmed that UK calves exported to Spain, are often shipped to the Middle East for slaughter.

With segments on Radio 4’s Farming Today, BBC 2 News, and the BBC News Channel, the BBC has released evidence gathered over the summer by Eurogroup for Animals’ members Animals International and the AWF. Despite the UK’s claim of not exporting animals for slaughter purposes and the active campaign carried out by Compassion in World Farming (CIWF) to Ban Live Exports, the investigations carried out by Eurogroup for Animals’ members clearly show that it happens to UK animals to end up in Third Countries’ abattoirs.

Indeed, the footage shows that calves exported on long journeys from the UK (Northern Ireland) to Spain to be fattened for beef are often then exported on further journeys to the Middle East. “We found animals with UK earring tags being slaughtered in Lebanon as well as a UK bull at the harbour in Cartagena (ES) ready to be loaded on a vessel headed for Libya”, said Gerit Weidinger, EU-Coordinator Animals International that for many years has investigated the awful conditions of the EU animals in Third Countries’ abattoirs. The footage published by BBC shows animals being thrown onto the floor and being dragged or suspended by their limbs while still conscious.

The UK currently exports some animals for breeding. Unweaned male calves are considered by-products of the dairy industry and their transport is particularly problematic because of the extremely fragile conditions of these young animals and their needs. AWF has been working on this issue for many years and restlessly reported about the animal welfare issues behind this trade. Only in 2019, the UK exported around 17,000 calves to Spain, the majority from Northern Ireland. Once reached Spain these animals are typically fattened on farms before being slaughtered or re-exported. In June this year,  AWF filmed a UK calf being moved outside of its pen and left to die. "The calf was suffering from a respiratory illness, which is common after long, stressful journeys with little food or milk replacement”.

To avoid animal suffering and avoid the law being circumvented, it is key to stop any EU and UK export to non-EU countries