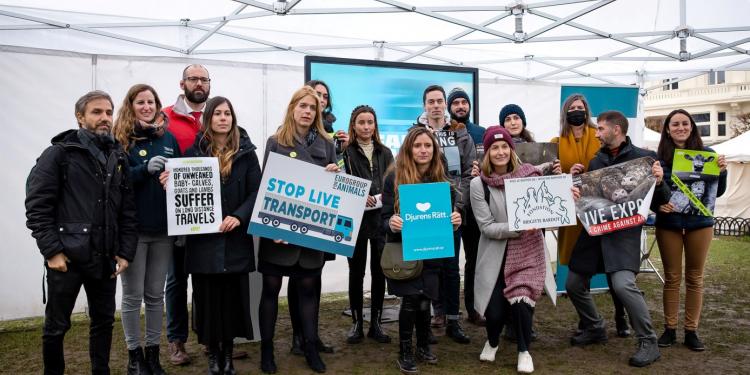 Press Release
After eighteen months of work, yesterday the Committee of Inquiry on the Protection of Animals during Transport (ANIT) voted on a series of compromise amendments to its concluding draft report and recommendations. Despite some positive calls for improvement, the final report’s text, as adopted, fails to address the bulk of the problems, calling for minor improvements rather than supporting a systemic change.

Indeed, despite acknowledging the poor implementation of the current Transport Regulation (Council Regulation (EC) No 1/2005) especially when animal consignments leave the Union, the Committee supports a continuation of live exports beyond the EU, calling for a meat and carcass trade only “when possible”. Additionally, the text lacks clear language on the need to establish a maximum journey time of 8 hours, utterly disregarding EU citizens’ calls.

Eurogroup for Animals was pleased to see that the Committee acknowledged the lack of comprehensive species- specific provisions, and called for refining the transport of unweaned animals as well as introducing ad-hoc provisions to guarantee the welfare of all the animals being transported, including fish, poultry, horses, as well as cats and dogs.

During the past year the Committee organised several hearings and workshops with experts, however the information retrieved seems to have only partially informed the final texts. The Transport Regulation will soon be revised and for the final vote in January Eurogroup for Animals calls on the European Parliament to step up the ANIT report’s ambition level and reflect citizens views by banning any long-distance transport, refining, replacing and reducing intra-EU transport, and shifting to meat, carcasses and genetic materials for export.

Despite some good wording on meat and carcasses trade, the committee did not make any call to ban live export. This is very disappointing, given the evidence the same committee collected thorough hearings, field missions and workshops with experts in the field, and to the severe crisis at sea which happened during its mandate. Indeed the Committee witnessed the Karim Allah and Elbeik vessels spending three months around the Mediterranean in a bureaucratic limbo which ended with the killing of 2,600 cows.
Reineke Hameleers, CEO, Eurogroup for Animals

With this Inquiry the Members of the European Parliament had the chance to set the basis for a revised Transport Regulation that both meets animal needs and contributes to building a sustainable Europe, in line with the EU Farm to Fork Strategy.

This cannot happen if long-distance transports are improved rather than banned, and if we continue to allow for the transport of young and pregnant animals over 40% of the pregnancy stage. We will continue pushing for key changes to ameliorate the worst elements at the time of the vote in Plenary, expected in January 2022. However, as it stands now, this Report is testament to a political divide in the ANIT committee and seriously failing to address the cruelty and tragedies we have been facing for decades.
Reineke Hameleers, CEO, Eurogroup for Animals

It is the fourth inquiry in the history of the European Parliament and first one on animal welfare. After receiving incredible support at the time of approval (March 2020), it was also granted an extension of the Inquiry period to better assess the problems linked to animal transport.