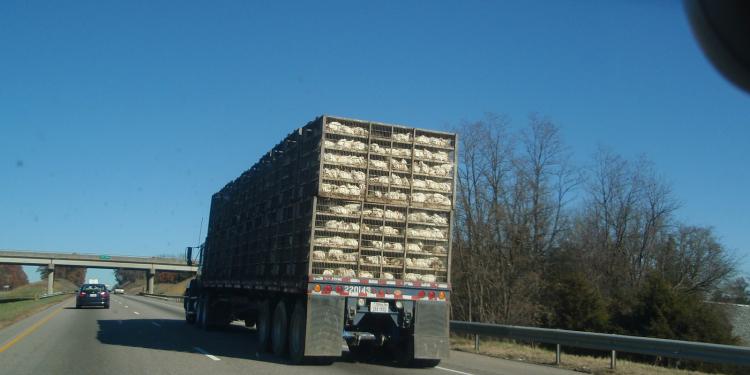 News
Again, this year the European (EU) Commission sent a letter to the EU Competent Authorities as a reminder of the risks for animals exposed “to extreme temperatures when they are transported over long journeys during the summer months (particularly from June to early September)”. However, the introduction of specific and comprehensive legislative provisions are needed to prevent further animal welfare crises.

Eurogroup for Animals calls on the EU Commission to address the issue of live animal transport under extreme temperatures in the revised Transport Regulation. Species- and category-specific maximum and minimum external temperatures should be set by law for the intra-EU trade. Additionally, the transport of meat/carcasses, and genetic material should be promoted, also by forbidding the intra-EU transport of live animals between June and September, and any kind of exports to non-EU countries, where animal conditions are harder to check.

In the past years the EU Commision has regularly warned the EU Member States on this issue and last year a few national restrictions were adopted. Unfortunately, without clear legislative provisions, transport of live animals continues to be problematic and a source of animal welfare problems. Indeed, the Council Regulation 1/2005 (Transport Regulation) currently indicates minimum and maximum temperatures only for the part of the journeys taking place by road (Annex I, Chapter VI, point 3.1). Even more complex is the reference to the internal temperature (means of transport) rather than the external one. The difficulty of anticipating the temperatures inside the means of transport for the whole duration of the journey provide operators with a valid excuse, in case of violation detection.

For a cross-EU Member States harmonised  approach, it is instrumental to have a legislative text indicating species- and category- specific minimum and maximum external temperatures. This would increase compliance and make the EU requirements easily enforceable by the authorities.

This year only a few EU Member States acted upon the EU Commission call to be extremely vigilant when approving journey plans. In France, one of the EU biggest intra- and extra-EU exporters of live animals, last year’s decree is still in place; but the measures approved are too poor to have a significant impact on the farmed animals transported during summer. Since the 20th July, Hungary has adopted some new measures. However, given their limited scope (applicable only to cattle transported on route from Hungary via Bulgaria to Turkey) animal welfare crises are likely to occur. The same approach was adopted by Austria, that in its decree mentions temperatures “exceeding 30 degrees Celsius'' and it only focuses on the movement of live animals to the Bulgarian and Turkish border.

Despite the scandal of the export of 70,000 sheep in July 2019, that provoked the mobilisation of the EU Commissioner Andriukaities, Romania has not taken any particular measure to protect the animals transported from its own territoires this summer: the Government adopted a ban for the road transport of live animals from Romania to Turkey above 30 degrees, translating into decree the provision on temperatures of the Transport Regulation EU Member States should have abided by since 2007.

More progressive is the position taken by The Netherlands: beside not granting export certificates to international transports if predicted temperatures on route exceed 30 degrees Celsius, now the Dutch Competent Authority (NVWA) requires drivers to communicate the GPS and temperature data when temperatures on route are expected to be above 27 degrees Celsius. This will allow the Competent Authority to evaluate the predicted and actual temperatures inside the truck. This practice will be carried out this summer as part of a pilot project and analysed together with the ones of other EU Member States. Regrettably, their position with regards to transports within the Dutch territories is more conservative, setting the limit to forbid live animal transport at 35 degrees Celsius (ambient temperature).

In addition, the temporary export ban adopted by key German Federal States and The Netherlands, even if not directly linked to the temperature variable, will, as a result, spare many animals from heat stress and unnecessary sufferings.