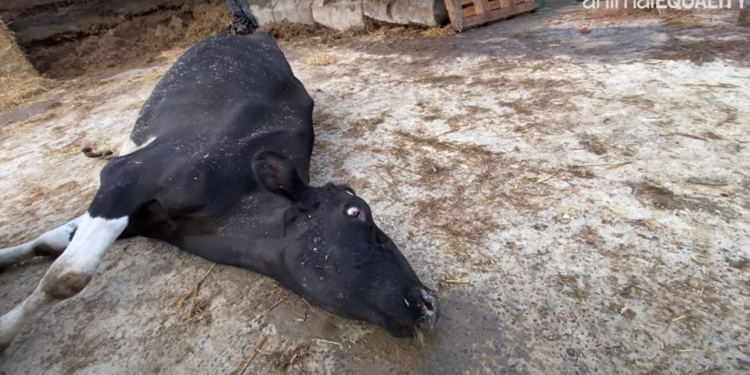 Animal Equality has released disturbing undercover footage of deliberate violence and neglect on Madox Farm, a large dairy farm in Carmarthenshire, South Wales, which holds over 650 cows and their calves.

Animal Equality's investigator covertly filmed troubling scenes spanning several months, including a number of serious legal violations. The footage reveals workers kicking and punching cows in the face and stomach, twisting their tails, and hitting them with sharp, metal shovels.

Footage from the investigation was broadcast to millions of people on BBC One’s Panorama. The program also featured an interview with Animal Equality’s investigator, who spoke about the violent methods he witnessed farm workers using to attempt to get a cow who had collapsed back to her feet.

Managers on Madox Farm were also found on several occasions to knowingly leave cows to suffer in severe, prolonged pain. On one occasion a cow was left in excruciating pain after her unborn calf had died inside of her. Despite a veterinarian who was visiting the farm recommending prompt euthanasia, which would have put the cow out of her misery, the on-site manager opted to delay action. The veterinarian was recorded saying that “this is one place where they’d rather just save the money”. The cow died overnight.

Animal Equality has investigated four UK dairy farms over the past six years and found violent treatment of cows and/or illegalities on each one. They assert that it is never the case of just one farm or worker being a ‘bad apple’ ­­– the entire dairy industry is built on exploitation and as a result, animal suffering is at its core.

Animal Equality is therefore demanding that the UK Government puts in place critical changes to the law to license farms, increase farm inspections and better protect farmed animals. They want to ensure that animal abusers are held accountable.