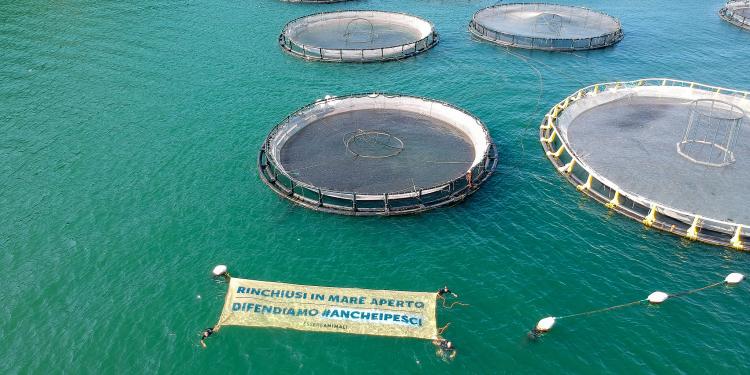 On board of a motorised boat, activists from our Italian member Essere Animali reached a fish farm in the province of La Spezia, Italy. Arriving near the cages in the sea where hundreds of thousands of fish are confined, they unrolled a banner to protest against the poor living conditions of these animals, destined for the large-scale distribution market.

"Caged in the open sea - #FishToo need to be protected" reads the thirty square meter banner captured by the drone that the activists used for the shooting. The fish farm where the protest took place, is specialised in the breeding of sea bass and sea bream, and has about thirty cages located along the coast of the Ligurian province. The fish spend around 16 to 22 months for the fattening process in these cramped cages in the sea until they reach the commercial weight of 300 to 500g.

“Crammed into cages, tanks, or ponds, these animals live in conditions that do not allow them to express their natural behaviour. Their life is of deprivation, spent in unhealthy environments with very high densities where they are often fed with antibiotics to contain the inevitable spread of viruses and bacteria", says Brenda Ferretti, Outreach Manager of Essere Animali. "Furthermore, compared to terrestrial animals, fish raised for food spend much more time on the farm, and at the time of the killing, they are victims of atrocious suffering. But fish are also sentient beings, capable of feeling fear and pain, and therefore worthy of being defended and protected”.

Essere Animali underlines the urgent need for a change in the critical conditions which fish are enduring in the aquaculture industry, the food sector with the highest growth rate in recent decades. According to the new FAO report “The State of World Fisheries and Aquaculture” (SOFIA), aquaculture production now represents 52% of fish destined for human consumption. This means that half of the fish that reaches consumers' tables comes from fish farms, where the predominant production model is industrial and intensive.

"Although fish are the animals raised in the greatest number in the food industry, they are also the least protected by national and EU legislation. This, combined with harmful breeding practices, such as the absence of effective stunning procedures which could reduce their suffering at the time of slaughter, pushes up to stand up for the protection of these animals", continues Brenda Ferretti.

In this problematic context, the role of large-scale distribution is decisive. In fact, according to the Italian Institute of Services for the Agricultural Food Market (ISMEA), about 80% of purchases of fresh fish and processed fish products in Italy take place in modern distribution outlets. With its purchasing power, large-scale distribution can encourage farming practices that are more respectful of the life of the fish raised in their fish supply chains, binding its suppliers to adhere to stricter production standards. As part of their campaign #AncheiPesci (“#FishToo”), Essere Animali is, therefore, collecting signatures for a petition calling for better welfare conditions for farmed fish.