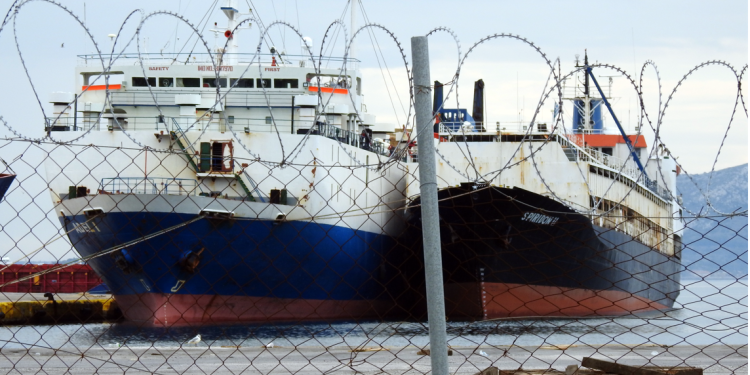 Animal Welfare Foundation (AWF), Compassion in World Farming (CIWF) and Animals International (AI) have witnessed how an old, former cargo ship with nearly 8,000 animals on board needed to be replaced while at sea. Inadequate European legislation and its poor implementation regularly lead to prolonged suffering of animals exported outside the EU.

On February 23rd, the livestock carrier Spiridon II left Tarragona in Spain. The country is one of the main exporters of live animals in Europe. Around 300 young bulls from France and Spain as well as 7,600 Spanish sheep were on board. Their destination was the Port of Aqaba in Jordan.

On February 27th, engine problems occurred. The journey was interrupted, and the ship spent three days near Greek ports. Unloading the animals onto European grounds was not an option. Once on the water, they are declared as so-called “export” animals and cannot re-enter the EU. This often leads to tragic consequences, such as the odysseys of Karim Allah and Elbeik in early 2021, where 2,600 calves and cattle were subjected to emergency slaughter.

Spiridon II was finally brought to Eleusis, near Athens, Greece on March 4. There the 8,000 animals were loaded directly from one vessel to another, namely, the livestock carrier Adel I, via a ramp, on the water. The reason for this manoeuvre at sea was that the port of Eleusis is not authorised to transport animals to third countries. On long journeys like this, there is no veterinarian on board, regardless of the number of animals. This was also the case on Spiridon II. It remains unclear whether the animals were fit to continue the journey to Jordan after 10 days onboard the vessel. It also remains unclear whether unfit animals were emergency euthanised on site.

The livestock vessels currently operating in the EU were converted from car ferries or cargo ships to livestock carriers at the moment when they should have been scrapped because they were too obsolete to continue. They are ancient vessels, operating under suspicious flags, and are poorly designed and maintained. These vessels pose many risks for the safety of the animals, the crew, and the environment.
Maria Boada-Saña, Veterinarian and Project Manager at AWF

This latest event just adds to a long list of problematic live exports. And Spiridon II is just one of too many old vessels with many deficiencies and unexpected problems arising during the journey. NGOs have repeatedly drawn attention to the underlying problems. Emergencies at sea cannot be solved easily and result in longer transports. If the competent authorities lose responsibility for ships that have left port, any unforeseen incident can have tragic consequences, as the example of Elbeik and Karim Allah shows. There should be a systematic approach to solving the problem instead of makeshift solutions for every single case.

NGOs exposed that during exports by sea, Council Regulation (EC) No 1/2005 on animal transports cannot be complied with. This shows once again that the current legislation and the ruling of the European Court of Justice do not ensure real protection of animals during the entire transport.

Once more, this latest incident reveals the severe flaws of EU’s live animal exports. The horrendous suffering that animals endure during live exports and the all too frequent mechanical problems of the vessels cannot go unnoticed. We urge the EU Commission to take immediate action on this matter. The current revision of the EU’s animal welfare rules presents the perfect opportunity to ban this cruelty once and for all.
Olga Kikou, Head of CIWF EU

Spiridon II remained in the port of Eleusis until March 8, when it left for reparation. The animals who survived the stressful journey so far arrived in Jordan on March 9, to be slaughtered in the most shocking and cruel conditions which are illegal in the EU.
Gabriel Paun, Animals International