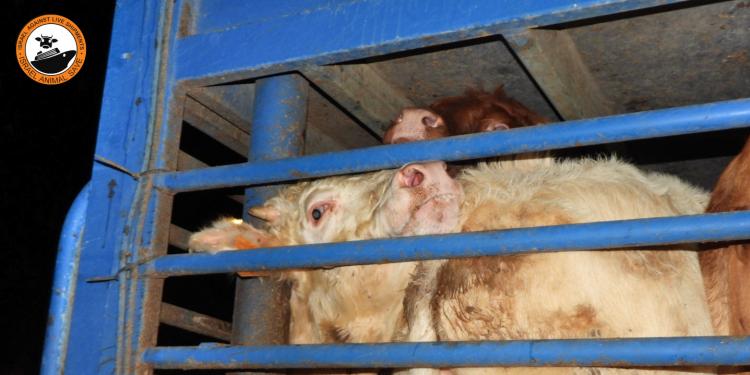 The vessel Phoenix III, heading to Israel with a cargo of 1,200 young bulls and 5,644 sheep, was dangerously stuck for two days at sea near Mazara del Vallo, Italy.

Portuguese authorities were informed by PATAV (a Portuguese civic movement) that the vessel had stopped for 48 hours. The ship, which left Sines (Portugal) on October 22nd and stopped on 27th near Italy, then left again after two days and reached its destination port in Israel on November 4th.

A coalition of NGOs, which followed the ship and filmed the animals while they were unloaded in the port of Haifa, wrote to the ANIT Committee (Committee of Inquiry on the Protection of Animals during Transport) urging to support a ban of live export.

The images taken during the unloading process show stuck and exhausted animals in high overcrowded conditions, with animals on top of each other, and very dirty bulls with broken horns. Some of the animals also showed heat stress symptoms. The animals were quickly loaded again on trucks. They will spend eight days in quarantine in the region of Mehola (90 km from the port), and then they will be transported again to different feedlots in Israel for 4-8 months before slaughter.

This case, as in the well-known cases of Karim Allah and Elbeik at the beginning of 2021, shows again how dangerous sea journeys can be for the animals.

In this incident, 14 animals were reported dead, but if the vessel were stuck for more days, we could have witnessed another tragedy.

In the letter to the ANIT committee, the NGOs referred to the importance of contingency plans and the need, by competent authorities and organisers, to take into account the forecast weather conditions until final destination when authorising a transport. Lack of feasible contingency plans and lack of weather verification have the potential to negatively affect animal welfare when unexpected situations arise.

Phoenix III is a 43 years old livestock vessel (Ex-reefer converted in 2011 at the age of 33 when it should have been already scrapped). Most of the livestock vessels operating in the EU are under similar age and conversion situation, and since 2017, they are the No. 1 category for the number of detentions worldwide, and considered as a high risk in Paris MoU risk profiling.

Furthermore, according to a recent study published in 2021, 36% of EU-approved livestock vessels have suffered major incidents, failures, or loss.

Besides that, there are concerns regarding the Phoenix III authorisation: according to the Romanian central authority Phoenix III had been transporting live animals without authorisation from April to August 2021 when it made made 8 journeys exporting animals from Croatia, Portugal and Romania to Israel. On August 18 the vessel was re-authorised to export animals by Croatia.

Aside from the reason for the stopping, this episode is again a good example of how the welfare of exported animals remains largely unknown during the sea part of the journey, and during transport in third countries to the final destination.

The many tragedies already happened in the past (the Queen Hind, Karim Allah, Elbeik vessels among others) show that the protection of animals during transport at sea is not possible for various reasons: bad weather and technical failures can cause delays, most ports are not able to shelter the animals, and conditions at sea can deteriorate suddenly with no possibility to escape putting both animals and crew at great risk.