At an event held on 3 December that aimed to define concrete steps for a transition to animal-free science, the Intergroup on the Welfare and Conservation of Animals launched a declaration calling on the European Commission to establish a concrete strategy with targets to phase out the use of animals in specific areas of research, education, and testing.

Tilly Metz MEP (Greens/EFA, LU) announced the Intergroup’s declaration in her speech opening the exhibition and roundtable event ‘Strategies for innovation in life sciences’, which was organised at the European Parliament (EP) by Eurogroup for Animals and the Finnish Presidency of the Council of the European Union and hosted by Sirpa Pietikäinen MEP (EPP, Finland).

The event gathered relevant stakeholders to seriously explore what can be done to start a transition to non-animal science, and proved there is no excuse to delay this transition. The speakers, who came from the research community and who are developing viable innovative approaches that move away from the use of animals, broadened the understanding of the competent authorities and policy makers in the room about this alternative way of research, testing and education.

“Having seen the approaches being developed by innovators at the forefront of this movement, we now have a firm understanding of the opportunities we need to foster in order to change the current scientific paradigm,” said Luisa Bastos, Animals in Science Programme Leader at Eurogroup for Animals.

“Results of #animal #experimentation cannot be transmitted to humans, yet tests on animals are still required by law. R&D for animal-free methods needs to be subsidized. Medical progress is important, but animal testing is the wrong way.” @BuschmannMartin #Act4LabAnimals pic.twitter.com/p7XEodoRPL

The round table discussion drew several conclusions, not least of all that the knowledge we have today on non-animal approaches can help us to invest more in these methods, which can make a huge difference on the improvement of healthcare, education and the lives of millions of non-human animals. Knowledge on existing non-animal methods can also help National Committees produce guidelines for evaluators of animal-based projects and for the competent authorities responsible for the authorisation of such projects. A better understanding of alternative approaches among the competent authorities can also inspire Member States when designing their scientific and educational policies.

The Finnish scientific community sees education and training on new and innovative methods as the most effective way of promoting their use. As a result, Finland is preparing an open access database that will include expertise in non-animal methods. Funding is seen by many researchers from all over Europe as a major issue, because their careers do not profit from the validation and adoption of innovative methods.

Besides funding, a recurrent concern emerged: how to enable dialogue between all stakeholders so that change happens in all sectors – academia, scientific communication, funding institutions, industry, regulatory agencies and healthcare – that are affected by the new approaches.

The event also identified some next steps: the harmful use of animals should be phased out in human and veterinary medical courses, as well as in life sciences. Testing and disease models should be standardised to better identify the applications and limitations of each method. There could be more concrete legislation in areas where alternatives are already available and well-characterised; and the limitations of animal-based methods should be made clear, to help build trust in human-relevant methods.

Alongside the event, Eurogroup for Animals kicked off an exhibition featuring the alternative technologies being developed and/or promoted by organisations such as the International Network for Humane Education, the Johns Hopkins Center for Alternatives to Animal Testing, the Finnish Centre for Alternative Methods, the Virtual Physiological Human institute, the Alliance for Human-Relevant Science and TissUse.

“Each year in the EU, more than 11 million animals are used for research, testing and educational purposes, and this number is far from decreasing, even though the Commission has adopted the goal of fully replacing the use of animals in science,” said Reineke Hameleers, Director of Eurogroup for Animals. “The event and exhibition showed us that we can already build a strategy for a transition towards non-animal science, thanks to the efficient and reliable human-relevant methods already being developed by the scientific community, with the goal of achieving replacement in the foreseeable future. We are encouraged by the strong support of the MEPs of the Intergroup on the Welfare and Conservation of Animals, and the European Union now needs to promote a clear strategy with milestones and deadlines.”

The next steps for the Intergroup’s declaration calling on a phase-out of the use of animals in science will be to garner support from MEPs in the form of signatures to present a strong case to the Commission. 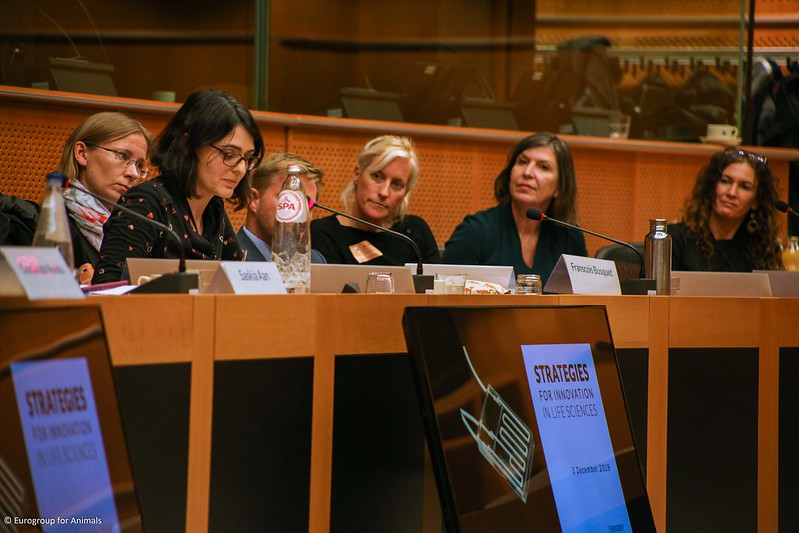 Please follow and like us:
Previous StoryMore than 160 organisations call on the new EU leaders to end caged farming
Next StoryESSERE ANIMALI: Big win for minks in Italy

#GoodNews 👏🏼🍾 @Versace will no longer use #kangaroo #leather in its products, as millions of marsupials die in Australian bush fires. “We welcome Versace’s announcement.” - @S_Pavesi/@LAVonlus Read more➡️bit.ly/2uPm5dD #Act4Wildlife pic.twitter.com/lHFSuI2a7c

🇳🇱🐭🐒Welcome to our new Dutch member @Proefdiervrij! We look forward to working together to end the use of #animals in research, education and testing in the EU and beyond. More info➡️proefdiervrij.nl #Act4LabAnimals #Act4AnimalsEU pic.twitter.com/sKpJMUifZv