Producing eggs and meat on a large scale in an economically viable way, with as low an environmental impact as possible and ensuring that the need of the birds are catered for.

This is the thinking behind Kipster, an innovative chicken farm in Castenray, The Netherlands.  Eurogroup for Animals and several member organisations recently had the opportunity to meet the chickens leading the food revolution. Ruud Zanders, entrepreneur, chicken farmer and one of the four founders of the farm led the visit.

The hens and their eggs

The farm has 24,000 hens (Dekalb White variety) divided into four sub-groups of 6,000 birds each. They are housed in a central barn with a number of simple, but according to Ruud, essential innovations.

The first is natural daylight – lots of it thanks to the extensive window area on the sloping ceiling. Ruud is a firm believer in the importance of giving the hens plenty of natural light, and says it minimises the incidence of feather pecking meaning that he does not need to trim the hens’ beaks (standard practice in conventional systems).

The hens’ living quarters allow them to fully express their natural behaviour: space to move and flap their wings, soil to scratch in, perches and branches to perch on and the chance to take a quiet nap (or should we say ‘kip’). Again simple elements, but ones that are missing from the lives of the 220 million hens that are still reared in cages in Europe.

The hens have access to outside areas: during daytime they can go out onto ranges with soil and perches.

Both inside and outside spaces include trees to make them more appealing to the hens: descending from forest birds, chickens prefer the comfort of covered areas, especially where they can perch.  Unfortunately for the birds and visitors, since December 2017 all farms in The Netherlands have had to keep their flocks inside because of avian influenza risk.

Male chicks, which in conventional farms are usually killed at birth and turned into pet food, are a valuable resource at Kipster where they are fattened and sold in products such as ‘Rooster burgers’. In the near future, the first generation of hens that have reached the end of their egg-laying days (so-called ‘spent hens’) will also be turned into meat products.

The sustainability of the operation is addressed in a number of ways. Extraction fans that remove up to 95 percent of fine particles from the air to ensure that there is no question of Kipster harming the health of people living nearby. Ruud hopes to be able to prove that the air coming out of the farm is cleaner than the air coming in, as the farm is a few hundred metres from a motorway.  That is not the only source of local pollution: when they got out of their cars in Kipster’s car park, the visitors were hit by the smell the pigs being kept in enclosed barns on the neighbouring farm hundred of metres away, but not a whiff from the hens in the building in front of them.

The farm produces twice as much electricity as it needs from the 1,078 solar panels on the roof: the rest is sold back to the Dutch grid.

Perhaps most interesting is what the hens are fed on: meal produced from waste products from food industries, such as bread and biscuits. Ruud explained that in this way people and chickens are no longer competing for food. On most intensive farming farms animals are reared on food that people could eat (corn, maize, soy etc.), which is highly inefficient. Kipster has in effect gone back to what happened on any farm before industrialisation arrived in the 60s: chickens turning scraps and waste into something that people find lekker!

Results after the first six months of operation are promising. One of the reasons for the project getting off to such a good start is the exclusive contract it has signed from the outset with LIDL. All the eggs and rooster meat are sold by the chain with three Beter Leven stars in its shops in The Netherlands.

From an animal welfare perspective, Kipster is a very interesting model. Faced with the persistent threat of avian influenza, it is resilient and gives hens good welfare even if they are deprived of outdoor access. 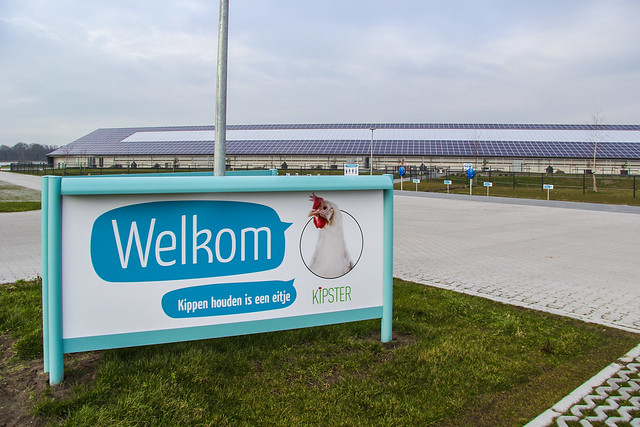 Please follow and like us:
Previous StoryEU-Indonesia trade negotiations: The EU must show leadership on animal protection
Next StoryAchieving coexistence with large carnivores in the EU

We are calling on the @EU_Commission to address the overconsumption of #meat, #dairy & #eggs in the #EUFarm2Fork Strategy, and improve & reduce their production. Time to put #AnimalWelfare & societal concerns at the centre of the new #EUGreenDeal! 📨➡️bit.ly/2VmiE9u pic.twitter.com/vY0sGz9KS3

🇪🇺🇬🇧🐾A win on the final mandate for #EU-#UK negotiations!👏🏼🙃 We see a clear opening for #AnimalWelfare to be considered under the envisaged #LevelPlayingField provisions. The UK should not scrap bans on hormone-fed beef 🐮 & chlorinated chicken🐔! pic.twitter.com/99ROXhXyZM

🇪🇺🐾Dear @SKyriakidesEU, we are moved by your genuine concern for #AnimalWelfare & commitment to reducing animal suffering. 🙏🏼 We - and the pumpkin cat - will be by your side to build a better #EU for all animals! #EndTheCageAge #BanLiveExport #Farm2Fork pic.twitter.com/KudU6mOlTk

Thank you Commissioner @SKyriakidesEU, we are really grateful for your time in the current difficult circumstances. 🙏🏼 #Covid19 twitter.com/SKyriakidesEU/…

🇮🇹🐾"Basically nobody really spends 1 day in prison even if sentenced, which shows that these victims & crimes are considered of a ‘lower league’". - @PieraRosati Will you be in Milan on 27/02? Sign up for @LNDC_NAZIONALE's conference on #AnimalRights➡️bit.ly/2Taa8YB pic.twitter.com/lpeIIRA3dG