Large carnivores are charismatic species. Wolves, bears, lynxes and wolverines are top predators that are starting to return to regions where they were completely wiped out by hunters in the past. Their conservation in highly populated continents like Europe requires integration with human activities.

In some EU Member States, a lack of natural prey, habitat loss and unprotected livestock contribute to attacks from large carnivores on domestic animals. Conflict takes place due to wild prey competition with humans and a fear from people to coexist with a large predator. Yet, achieving coexistence with large carnivores is possible and necessary to ensure the long-term conservation of the European natural environment.

Following the recently published study by the European Parliament’s Committee on Petitions (21st  February 2018) entitled ‘Large Carnivore Management Plans of Protection: Best Practices in EU Member States’, a group of MEPs and policy and conservation experts met today (7 March 2018) at the European Parliament to address the issue. The study presents the regulatory measures and effective techniques that have been developed and tested to minimise wildlife conflicts and help humans to successfully coexist with large carnivores in the long term.

During the event, experts from across the EU came together to discuss the various possible solutions and strategies, which can be adopted, to achieve long term coexistence with large carnivores for the benefit of people and wildlife conservation.

Ilaria Di Silvestre, Wildlife Programme Leader at Eurogroup for Animals, stated, “In recent years, numerous EU-funded projects have shown that coexistence with large carnivores is possible and has already been achieved in many regions in the EU. We welcome the newly published study by the European Parliament’s Committee on Petitions as it presents the regulatory measures and effective techniques that have been developed and tested to minimise conflicts. Now Member States should promote the methods that are demonstrated to have a high success rate and facilitate their implementation, instead of calling for more derogations to the Habitats Directive.”

“Instead of hunting, coexisting with local wildlife in rural communities will create significant economic opportunities in the form of sustainable wildlife-based eco-tourism and at the same time greatly improve the health of the ecosystems” added  Francisco Sánchez Molina, Luonto-Liiton susiryhmä International Campaign Coordinator.

For further information on our wildlife programme, click here. 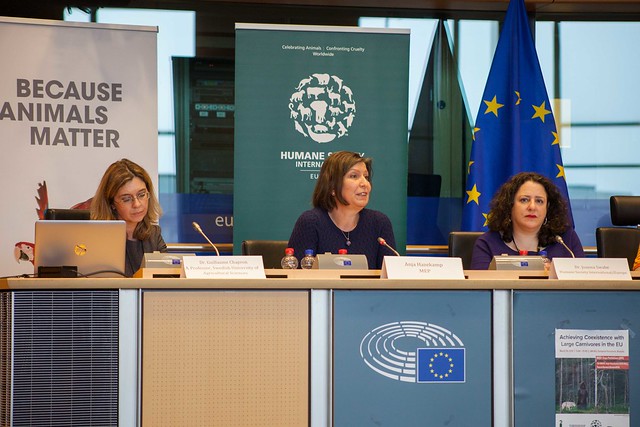 Please follow and like us:
Previous StoryMeeting Kipster’s chickens leading the food revolution
Next StoryEU to act responsibly on import of cruel and contaminated kangaroo meat

🇫🇮 A huge thank you to Finnish film director #AkiKaurismäki for supporting @susiryhma/@wolfactiongroup and their work to defend the rights of #wolves, who shouldn't be persecuted just for being who they are. Read more [FI] ➡️bit.ly/3ayf95i #Act4Wildlife #VisitFinland pic.twitter.com/nphSAKwALu

🇪🇺🚢🐑"The existing legislation is not up to date, unenforceable and out of step with societal demands." - @ReinekeEG4A Why should the EU stop exporting animals to non-EU countries? Read more here➡️bit.ly/2uj0OsP #BanLiveExport #StopLiveTransport pic.twitter.com/sOmp4pwtXl